The Blue Jays announced today that they have signed veteran infielder Freddy Galvis. It’s a one-year deal that includes a club option for 2020. 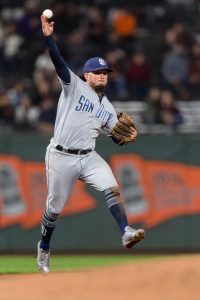 Galvis receives a $5MM guarantee, per MLB.com’s Mark Feinsand (via Twitter). That includes a $4MM salary for the coming season and $1MM buyout on a 2020 option that can instead be exercised at $5.5MM. Righty Danny Barnes was designated for assignment to create 40-man roster space.

Galvis, 29, has logged a ton of innings at shortstop over the past several seasons for second-division clubs. In fact, he appeared in all 162 games in 2017 with the Phillies and in 2018 with the Padres. He was rumored to be a target of the Pirates after talks for a return to San Diego seemingly fizzled earlier in the offseason.

As it turns out, Galvis will join a Toronto club that doesn’t seem to have much hope of contention but is interested in bolstering its infield situation. It remains to be seen whether he’ll be given an everyday role at short or will instead share time there with Lourdes Gurriel Jr. while also moving around the field.

How to explain the fact that Galvis has been a steady regular for the past four seasons? Beyond the fact that he’s obviously a respected and dedicated professional, with the benefit of being a switch-hitter with both pop and speed, glovework obviously represents the carrying tool here.

Galvis is quite sure-handed, having been charged with just 24 total errors over the past three campaigns. Metrics are not unanimous on Galvis’s abilities at short, but generally reflect a positive view of his glovework. Oddly, he started out as a Ultimate Zone Rating darling who wasn’t as well-loved by Defensive Runs Saved, but the two systems flipped on him last year (-3.8 UZR, +7 DRS).

While he’s primarily a shortstop now, it probably doesn’t hurt that Galvis has a good bit of experience elsewhere as well. Previously, he has spent time at second base, third base, and left field (along with a one-game stint in center).

As for Barnes, the 29-year-old righty had a strong 2017 showing in Toronto, working to a 3.55 ERA with 8.5 K/9 and 3.3 B/9 through 66 innings of relief. His extreme proneness to fly-balls, penchant for surrendering homers and an unsustainable 81.6 percent strand rate made him a clear regression candidate, though, and that proved to be the case. Barnes was clobbered for a 5.71 ERA with 8.4 K/9 against 4.8 BB/9 in 41 innings this past season.