5:48pm: Los Angeles will take on $3.6MM of Martin’s salary, with the Jays paying the other $16.4MM of what’s still due, per Ben Nicholson-Smith of Sportsnet.ca (Twitter link).

1:12pm: The Dodgers have reached an agreement on a trade with the Blue Jays that will bring veteran catcher Russell Martin back to Los Angeles, reports Arash Madani of Sportsnet (via Twitter). Martin will earn $20MM in 2019 — the final season of a five-year, $82MM contract with the Jays. Presumably, Toronto is paying down a hefty portion of that remaining salary as part of the trade. 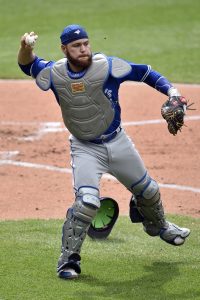 The addition of Martin shouldn’t strictly take the Dodgers out of the running for Marlins star J.T. Realmuto, though there’s certainly less urgency for Los Angeles to meet Miami’s lofty asking price with this deal in place. Still, it’s not inconceivable that president of baseball operations Andrew Friedman could make a strong offer for Realmuto even with Martin and Austin Barnes on the roster. Barnes has a minor league option remaining and is capable of playing the infield, and some reports have indicated that Miami would like a catcher with MLB experience as part of a Realmuto deal (in addition to multiple top prospects); Barnes could fit that description, speculatively speaking.

Soon to turn 36, Martin will bring a keen eye a the plate and strong defensive skills to the Dodgers, who of course originally drafted and developed the four-time All-Star. While last season’s .194/.338/.325 batting line obviously looks ugly, Martin walked at a nearly 16 percent clip, one of the highest rates in the league, and demonstrated that he still has a bit of pop — certainly enough to make him comparable to other catchers throughout the game. Martin hit 10 homers and recorded a .133 ISO (slugging percentage minus batting average), the latter of which checked in only slightly south of the mark of a league-average catcher (.141 ISO).

Martin did hit the ball on the ground (51.2 percent) and pop up (19.4 percent of his fly-balls were pop-ups) at career-high rates in 2018, so the .234 average on balls in play he posted last season may not be as much of a fluke as it would seem at first glance. But, if he’s able to correct either of those issues in a return to Chavez Ravine, he’ll give the Dodgers a high-quality defender with excellent on-base skills. Martin’s caught-stealing numbers have dwindled recently (22 percent in 2018), but he remains a premium pitch framer and was among the best in baseball at blocking pitches in the dirt, per Baseball Prospectus’ metrics.

The trade of Martin to Los Angeles will open the door for Jays catching prospect Danny Jansen to audition as a long-term piece behind the dish. The 23-year-old Jansen has long rated as one of the organization’s better prospects and enjoyed a solid late-2018 debut with a .247/.347/.432 slash and three homers in 95 plate appearances. Jansen will team with 27-year-old Luke Maile, a strong defensive backstop who had a career-best .248/.333/.366 batting line in 231 plate appearances last season.

Brito, 20 in March, signed with the Dodgers for a $2MM bonus as a 16-year-old amateur and has yet to ascend beyond Rookie ball. He split the 2018 season between the Dominican Summer League (eight games) and the Pioneer League (53 games), posting a combined .295/.359/.496 batting line with 11 homers and 14 doubles in 262 plate appearances. He’s quite a ways from big league relevance, but he did enjoy solid production against older competition in the Pioneer League this past season.

Sopko is a 24-year-old righty whom the Dodgers selected in the seventh round of the 2015 draft. He opened the 2018 season at Class-A Advanced and ascended to Double-A midway through the season. Between those two levels, Sopko notched a 3.52 ERA with 9.3 K/9 against 2.1 BB/9 and 1.1 HR/9. As a fly-ball righty with a low-90s heater who relies on control, his realistic ceiling is more along the lines of a back-end starter, but his success in Double-A means he shouldn’t be too far from getting a look at the big league level.