5:30pm: Lovullo’s contract will run through the 2021 season, tweets Mark Feinsand of MLB.com.

5:07pm: The Diamondbacks announced this afternoon that they’ve agreed to a contract extension of undisclosed length with manager Torey Lovullo. His previous contract had run through the 2019 season. 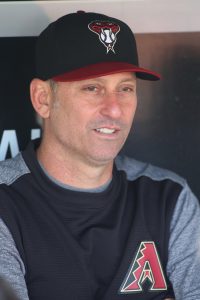 “Torey’s leadership and ability to connect with people, specifically our players and coaches, provides the foundation for the culture we continue to cultivate and grow in Arizona,” said D-backs general manager Mike Hazen in a statement accompanying the announcement. “This is an exciting day for Torey, his family and the D-backs. We can’t wait to get started at Salt River Fields at Talking Stick in two weeks.”

Lovullo, 53, is entering his third season as the Diamondbacks’ skipper after having previously served as a bench coach to John Farrell in Boston. That time with the Red Sox surely played no small part in his ultimate hiring in Arizona; Diamondbacks general manager Mike Hazen and assistant GMs Amiel Sawdaye and Jared Porter were all with the Red Sox prior to being named to their current positions.

In two seasons at the helm of the Diamondbacks, Lovullo has overseen a 175-149 club. That includes a second-place finish in the NL West in his rookie season — one that resulted in a Wild Card victory and a trip to the National League Division Series. Few pegged the D-backs as contenders heading into the 2017 season, and the manner in which the team exceeded expectations led to Lovullo being named 2017 National League Manager of the Year.

Things didn’t play out as nicely in 2018, as the Diamondbacks were unable to meet the lofty expectations placed on them following that surprise playoff run. The D-backs dealt with several notable injuries and saw some key players take a step back in ’18, ultimately resulting in a solid but unspectacular 82-80 record — a finish that left them 8.5 games back of the second-place Rockies and 9.5 games behind the division-winning Dodgers.

Clearly, however, that disappointing finish did little to make Hazen and the rest of the Arizona front office question Lovullo’s status as the person they prefer to lead the dugout. The Diamondbacks will again enter the season with little in terms of expectations. Face of the franchise Paul Goldschmidt to the Cardinals, while top starter Patrick Corbin and center fielder A.J. Pollock have signed elsewhere in free agecy. Lovullo, then, will be tasked with helping to maximize the potential of a new core group as the D-backs enter a transitional phase. The continued development of right-hander Luke Weaver and catcher Carson Kelly, acquired in the Goldschmidt trade, will be keys to the organization’s long-term outlook, as will the manner in which prospects like Jon Duplantier, Jazz Chisholm, Daulton Varsho and Taylor Widener adjust to the Majors (particularly in the case of Duplantier and Widener, who are on the cusp of MLB readiness).