In a fascinating development, the Mets have agreed to a two-year, $20MM deal with veteran infielder Jed Lowrie, as first reported by Jeff Passan of ESPN.com (Twitter link). The Excel Sports Management client will receive a $5MM signing bonus along with salaries of $6MM and $9MM in the two years of the contract, Jon Heyman of Fancred tweets. The deal also includes a half-million-dollar assignment bonus in the event of a trade. 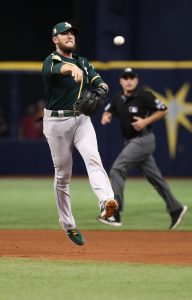 The Mets previously acquired Robinson Cano to play second base, bumping interesting rookie Jeff McNeil off of the position and into a utility role. With Todd Frazier already in place at third base, J.D. Davis representing another recently acquired corner piece, and youngster Amed Rosario at short, it’s not immediately apparent where Lowrie will fit in.

It could be that future moves will help clarify the situation. Alternatively, the Mets might conceivably utilize Cano and/or Frazier at first base for at least part of the season. Davis and McNeil also represent options in the outfield. It could be, then, that the org will mix and match with the players it has assembled. Lowrie could certainly be moved around the diamond, with the team leaving it to skipper Mickey Callaway to allocate playing time and manage the competing priorities. Regardless, it’ll certainly be interesting to see how things materialize from here.

Lowrie, 34, has played almost exclusively at second base over the past three seasons with the A’s. Before that, however, he had lined up at short for the bulk of his career, while also logging over a thousand innings at the hot corner.

A former first-round draft pick, Lowrie never really stuck with his first team, the Red Sox, but established himself as a solid regular over the 2012-14 campaigns. Things turned south in the two years that followed, though, as Lowrie dealt with injury issues. His 2016 campaign ended with a pair of procedures, one on his foot and the other to address a deviated septum.

Ever since, Lowrie has been a (switch-)hitter reborn. He has posted consecutive 120 OPS+ campaigns, slashing a combined .272/.356/.448 with 37 home runs while compiling 151 walks to go with 228 strikeouts. Meanwhile, he has graded out as an average-to-very good defender, making Lowrie one of the game’s better second baggers for two years running.

Lowrie now becomes the latest player to join his former agent, Brodie Van Wagenen, in Queens. It’s a hefty price tag for a utility player, if that’s how Lowrie is utilized, though odds are the salary will also reflect extensive intended usage, even if it is at multiple positions. Aided by a market chock full of second base options, the Mets will get Lowrie for the same $10MM AAV that MLBTR predicted entering the winter, but for one less guaranteed season than we guessed would be required. It’s a nice price for a player of this quality, even if he is set to turn 35 years old just after the start of the season to come.