Feb. 15: The Marlins have formally announced the signing. To make room on the 40-man roster, young right-hander Julian Fernandez, who is recovering from Tommy John surgery, was placed on the 60-day injured list.

Feb. 12: The Marlins are in agreement on a one-year contract with veteran reliever Sergio Romo, pending a physical, reports Jesse Sanchez of MLB.com (via Twitter). Romo will be guaranteed $2.5MM and can earn additional money on top of that via incentives. Talks between Miami and the veteran righty were reported by Ken Rosenthal of The Athletic and Jon Heyman of MLB Network earlier this afternoon. Romo is represented by Meister Sports. 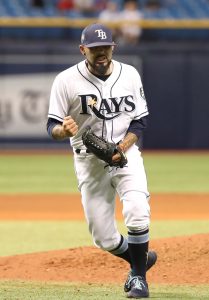 Set to turn 36 early next month, Romo will give the Marlins a veteran anchor to pair with younger less-experienced arms such as Drew Steckenrider, Adam Conley and Tayron Guerrero late in games. While he helped the Rays to pioneer the “opener” strategy last season, Romo’s best work with Tampa Bay came in his more familiar role as a reliever and closer. When pitching out of the ’pen for the Rays, Romo turned in a solid 3.88 ERA with 9.8 K/9, 2.3 BB/9 and a 34.3 percent ground-ball rate.

Home runs were somewhat of an issue for Romo, an extreme fly-ball pitcher, as he served them up at an average of 1.47 per nine innings pitched. However, he also maintained a 13 percent swinging-strike rate and generated a swing on a third of the out-of-zone pitches he threw to opponents — both strong marks that create some optimism about his ability to continue missing bats. A move to the National League — specifically to the cavernous Marlins Park — should help to curtail some of the troubles he had with the long ball last year.

While the Marlins could yet leave the ninth inning open for competition between Romo, Steckenrider and Guerrero in camp, it’s fair to call the veteran Romo the favorite to close games in Miami. He tallied 25 saves for Tampa Bay a year ago and has compiled 109 saves across an 11-year Major League career.

If he can once again thrive in a ninth-inning capacity for the Marlins, his tenure with the organization could prove to be a short one. While Romo’s market was oddly tepid in free agency — the Twins and Rangers were reportedly willing to offer him a minor league deal, while the Blue Jays were interested at the MLB level — the demand for affordable bullpen help is always at its greatest leading up to the non-waiver trade deadline. Given that the Marlins are the clear cellar dwellers in a stacked NL East division, Miami seems likely to make Romo available to other clubs in need of relievers this summer.