THURSDAY, 5:45pm: Norris would earn $3MM upon making the roster and can pick up another $1.25MM via incentives, per Robert Murray of The Athletic (Twitter link).

4:35pm: It’s a minor league deal for Norris, according to Shi Davidi of Sportsnet (Twitter link).

4:22pm: The Blue Jays have agreed to terms on a contract with free-agent right-hander Bud Norris, reports Craig Mish of SiriusXM (via Twitter). Norris is represented by the Ballengee Group. 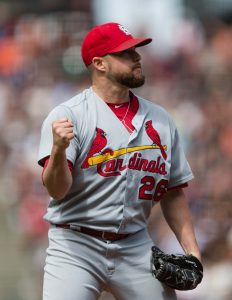 Norris enjoyed a second consecutive season with a swinging-strike rate of 12 percent or better — the first two such campaigns of his career — and he induced swings at pitches outside the strike zone at a career-best 35.9 percent clip, as well. That mark tied him for 18th among 151 qualified relievers, while Norris registered a career-high 94.6 mph average fastball.

Looking back to Norris’ 2017 campaign, his results in terms of fielding-independent metrics, strikeout rate, ground-ball rate and swinging-strike rate were nearly identical to the marks he posted in 2018. Over those two seasons, he’s combined for 47 saves between the Angels and Cardinals. However, despite the resurgence he’s enjoyed as a reliever, the veteran nonetheless had to settle for a non-guaranteed pact. He’s far from the only veteran who’s had to do so this offseason on the heels of a solid campaign, but it still looks to be a quality low-risk pickup for a Blue Jays club that has ample room to add a veteran arm to its relief corps.

General manager Ross Atkins said early in February that his club’s focus from that point forth would be on pitching acquisitions, and Norris stands out as one of the clear best arms remaining on the relief market. He’ll slot into a late-inning mix that features Ken Giles and Ryan Tepera, with other relief options like David Paulino, Joe Biagini, fellow non-roster invitee John Axford and Rule 5 pick Elvis Luciano all vying for jobs in rookie manager Charlie Montoyo’s bulllpen.