1:13pm: The Mariners are sending around $2MM to the Braves in the trade to balance out the difference in salary, tweets MLB Network’s Jon Heyman. Paired with the remaining money that would’ve been allocated for Biddle’s pre-arb salary, it seems likely that the trade is effectively cash-neutral.

12:51pm: The Mariners announced that they’ve acquired left-handed reliever Jesse Biddle and right-hander Arodys Vizcaino from the Braves in exchange for right-hander Anthony Swarzak and cash. Vizcaino’s inclusion in the trade would appear to be purely a financial component of the trade, as he’s a free agent at season’s end and is not expected to pitch again in 2019 after undergoing shoulder surgery. Vizcaino is on the 60-day injured list, so there are no additional 40-man moves required by the Mariners to accommodate the addition of Biddle, who will report to the team’s Major League bullpen. 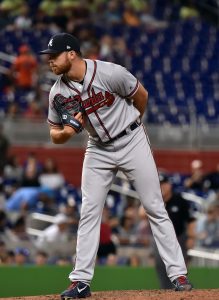 Because he was out-of-options and playing on a win-now club, Biddle’s fate looked largely sealed as this year’s control struggles continued from April into May. He was designated for assignment by the Braves last week. The Mariners will hope that they’re able to turn him around and get him back to his 2018 form. If they can manage to do so, they’ll control Biddle through the 2023 season. However, he’ll have to sort things out at the big league level, as his lack of minor league options means he can’t be sent down without first being passed through waivers.

For the Braves, they’d already decided to move on from Biddle and stood to watch Vizcaino leave as a free agent at the end of the year, so they’re not really giving up anything to take a cheap look at Swarzak. The 33-year-old Swarzak has struggled to a 5.27 ERA and eight walks (one intentional) in 13 2/3 innings with the Mariners, but he’s also racked up 17 strikeouts. Injuries have hampered him considerably since signing a two-year, $14MM contract with the Mets prior to the 2018 season, as he’s dealt with an oblique strain and a pair of shoulder-related injuries. 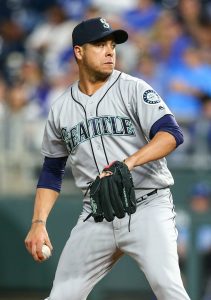 In his last full, healthy season in 2017, however, Swarzak turned in 77 1/3 innings with a 2.33 ERA, 10.6 K/9, 2.1 BB/9, 0.70 HR/9 and a 43.9 percent grounder rate between the White Sox and Brewers. That success is recent enough to give the Braves something to dream on as they scour what is likely an extremely thin trade market for bullpen help at this juncture of the season. Atlanta will surely be active in pursuing additional pieces over the next couple of months, but few teams are willing to sell off quality arms in mid-May — and those that are willing to do so generally place lofty asking prices on said arms given the scarce supply this time of year.

Swarzak will head to Atlanta without any sort of guarantee that he’ll be a long-term piece for the remainder of the season. The fact that the Braves unloaded the remaining $3.43MM on Vizcaino’s deal and acquired cash from the Mariners makes it likely that Seattle sent enough money to make this a cash-neutral swap. Swarzak is being paid an $8.5MM salary in 2019 and has about $6.08MM of that sum still to be paid out.