Rays reliever Emilio Pagan was not the headliner in a three-team offseason trade featuring Tampa Bay, Oakland and Texas. That honor went to infielder Jurickson Profar, whom the Athletics acquired from the Rangers in the swap. However, between Pagan and Profar – the two major leaguers involved in the deal – it’s the former who has been the more valuable player so far in 2019. 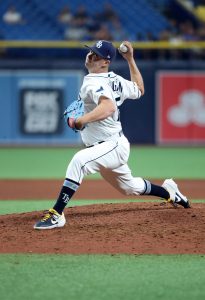 Although Pagan just debuted in the majors in 2017, he’s already something of a journeyman. Pagan spent his rookie season as a useful piece of the Mariners’ bullpen before going to the Athletics in a trade prior to the 2018 campaign. While Pagan wasn’t that effective in his lone year with the A’s, he has emerged as one of the Rays’ go-to relievers since they recalled him from the minors in mid-April.

Pagan, a 28-year-old right-hander, has recorded a 1.75 ERA with 11.75 K/9 and 2.25 BB/9 in 36 frames, making him one of the majors’ premier relievers in the run prevention and K/BB categories. Pagan also ranks 11th among all pitchers in weighted on-base average against (.221) and an even better third in xwOBA (.220), trailing only elite relievers Josh Hader and Kirby Yates in the latter department.

Pagan’s transformation into a great reliever, at least this year, has come with a change in pitch mix. He has always leaned on two offerings – a four-seam fastball and a slider – but the usage of each has changed significantly since last year. Pagan’s throwing his four-seamer 55.5 percent of the time, down from 64.5 in 2018, and has upped his slider usage from 29.4 percent to 40.6 in the same span. Both pitches have produced excellent results to this point, especially his fastball. Hitters have mustered an awful .200 wOBA/.156 xwOBA against it, thanks in part to an increase in velocity. The pitch averaged 93.8 mph in 2018, but it has shot to 95.4 this season. Unsurprisingly, the whiff percentage on Pagan’s four-seamer has risen substantially since 2018, having gone from 25.8 to 34.9 percent.

As you’d expect, with his strikeout rate and velocity at an all-time high, Pagan has fooled more hitters this year. Pagan’s chase rate is almost 4 percent better than his career mark, hitters have made 4-plus percent less contact against him than usual, and his swinging-strike rate is roughly 2.5 percent superior to his lifetime mean. While the average reliever has drawn swings and misses at an 11.8 percent clip this season, Pagan’s at 17.1 – good for ninth in the majors.

When batters have made contact against Pagan this season, it hasn’t been as easy to elevate the ball. At a piddly 24.9 percent, Pagan posted the majors’ last-ranked groundball rate among relievers from 2017-18. That number has elevated to an even 40.0 since he joined the Rays. With help from his uptick in grounders, home runs have become rarer against Pagan, who rated last among relievers in HRs per nine (1.60) over his first two seasons. He’s now surrendering just one per nine, which checks in well south of the league average (1.34).

It’s true Pagan is benefiting from a .224 batting average on balls in play and a 90.2 percent strand rate, two figures that could be difficult to sustain. But he’s handling both same-handed and lefty hitters, and Statcast is quite bullish on his work. At this point, Pagan looks like one of the majors’ most underrated additions of last winter and someone who could help pitch the playoff-contending Rays to the postseason.