The Giants have acquired second baseman Scooter Gennett from the Reds, Mark Sheldon of MLB.com reports. The Reds will get cash considerations in return, per Jon Heyman of MLB Network. 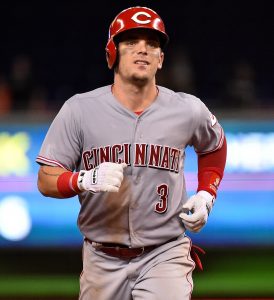 It’s a win-now move by the Giants, who have charged back into NL wild-card contention over the past several weeks. The 29-year-old Gennett, who’s earning a $9.775MM salary, isn’t under control past this season. He has missed almost all of 2019 because of a groin injury, and in the 72 plate appearances Gennett has taken, the lefty has managed a meager .217/.236/.261 line without a home run.

While this season has been a nightmare for Gennett, he was unexpectedly one of the majors’ best second basemen over the previous two years. After the Reds acquired him from the Brewers via waivers entering 2017, he proceeded to slash .303/.351/.508 with 50 home runs and 6.7 fWAR in 1,135 plate appearances through last season. That type of production would be ideal for the Giants, who have seen No. 1 second baseman Joe Panik struggle to a .231/.305/.312 line with three homers in 375 trips to the plate this year.