After first picking up reliever Daniel Hudson from the Blue Jays, the Nationals have reached an agreement to acquire lefty Roenis Elias from the Mariners. Ken Rosenthal of The Athletic was first to report a deal was close, with Joel Sherman of the New York Post indicating that Elias had indeed been traded to the Nats.  Minor leaguers Elvis Alvarado and Taylor Guilbeau will head to Seattle in the deal, according to Rosenthal. 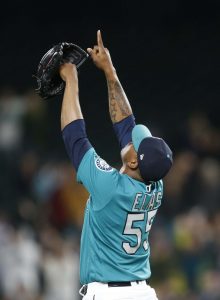 The Nationals notoriously own the worst bullpen ERA in baseball, with their crew tallying a 5.97 ERA in 321 1/3 innings. Aside from closer Sean Doolittle, they’ve currently got Matt Grace and Tony Sipp coming out of the bullpen from the left side.  Neither has been particularly effective.  The Nationals signed veteran lefty Jonny Venters in late May and selected his contract a month later, but he’s on the IL with a shoulder strain.

Guilbeau, a lefty reliever who was promoted to Triple-A earlier this month, ranked as the Nationals’ 15th-best prospect according to MLB.com.  The site rated him as a 40 grade prospect, suggesting he can ride a mid-90s heater and above-average slider to a career as a left-handed specialist.  Alvarado was signed as an international free agent for $700K out of the Dominican Republic in 2015.  He played right field regularly in 2017 in the Dominican Summer League, moving to the mound in 2018-19 in the Gulf Coast League.