The Athletics have struck a deal to acquire righty Tanner Roark plus cash from the Reds, according to Ken Rosenthal of The Athletic (Twitter link). Outfielder Jameson Hannah is headed to Cincinnati in return, per Jon Heyman of MLB Network (Twitter link).  Susan Slusser of the San Francisco Chronicle notes that the Reds will pick up $2.1MM of Roark’s remaining salary, which looks to be a bit more than $3MM.  The trade is now official.  As is commonplace, Roark learned of the trade in an Arby’s parking lot. 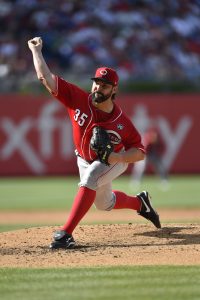 Roark is earning $10MM this year before hitting free agency at season’s end. He was a clear trade candidate for a Cincinnati organization that is largely looking ahead to the 2020 campaign. The club’s recent acquisition of Trevor Bauer, combined with the recent return of Alex Wood, left a bit of a rotation overload even with Tyler Mahle hitting the injured list.

The Athletics have scrambled all season long to keep their own rotation afloat. Anticipated arrivals of a variety of injured, younger hurlers just haven’t happened yet. With the club competing hard for a Wild Card slot — if not a late dash for the division — there was a clear need for more starters, even after the prior acquisition of Homer Bailey (who has struggled in Oakland).

Soon to turn 22, Hannah was a second-round pick in the 2018 draft. He has been playing at the High-A level, where he carries a .284/.341/.381 batting line in 414 plate appearances. It seems his power will need to come around a bit, but he’s regarded as possessing a quality hit tool with an advanced approach.  Prior to the season, Baseball America considered Hannah a 50 grade prospect, citing a “sweet left-handed swing paired with plus athleticism and double-plus speed.”  BA sees Hannah as a strong defensive center fielder and likely big leaguer, making him a nice score for two months of Roark.  It appears the Reds were able to pick up most of the tab on Roark’s salary and extract a better prospect as a result.