NOVEMBER 25: The Seattle organization has announced the signing.

NOVEMBER 22: The Mariners and first base prospect Evan White are in agreement on a six-year, $24MM contract that contains three club options, Jim Callis of MLB.com reports (via Twitter). The contract, which can max out at $55.5MM if the options are exercised (via Robert Murray), locks up a key piece of the Mariners’ future before he even sets foot in the Majors. White is represented by True Gravity Baseball. 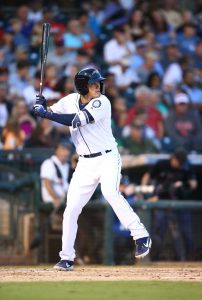 White, the No. 17 overall pick in the 2017 draft, spent the 2019 campaign with the Mariners’ Double-A in Arkansas, where he batted .293/.350/.488 with 18 home runs, 13 doubles, two triples, a 7.3 percent walk rate and a 23 percent strikeout rate in 400 plate appearances. Those numbers were particularly impressive in a pitcher-friendly setting, evidenced by White’s robust 132 wRC+ (indicating that he was 32 percent better at the plate than the average hitter in the Texas League).

From a broader offensive standpoint, the University of Kentucky product has performed well throughout his minor league tenure. He hit .277/.345/.532 in a tiny sample of 14 games of short-season Class-A ball in 2017 after being drafted and followed that up with a .303/.375/.458 slash in a full season at Class-A Advanced in 2018.

The extension in many ways mirrors the long-term deal signed by Scott Kingery just prior to the 2018 season. As was the case with Kingery at the time, White is a 23-year-old top prospect who is widely expected to be a key contributor for his club in the near future. Both deals guaranteed the player $24MM over six years, though Kingery’s option years are valued at a slightly higher rate, as his contract can max out at $65MM. That’s perhaps reflective of the fact that Kingery, unlike White, had already played in Triple-A and was perhaps on the cusp of making the Opening Day roster out of Spring Training. White, meanwhile, could still be ticketed for some Triple-A time to being the 2020 season, although the long-term deal should increase his chances of breaking camp with the team. There’s no longer any reason to play service-time games and option him to Triple-A if he convinces the team of his MLB readiness with a strong spring effort.

White is suddenly the only player on the Mariners’ roster signed to a guaranteed contract beyond the 2021 season. The 2020 campaign will be a pivotal one for the “reimagining” Mariners, as they’ll get their first glimpse at White and quite possibly (later in the summer) at vaunted outfield prospect Jarred Kelenic (acquired in last winter’s Edwin Diaz/Robinson Cano trade). Lengthy auditions for lefty Justus Sheffield, righty Justin Dunn and outfielders Kyle Lewis and Jake Fraley — each of whom made his MLB debut in 2019 — are likely on the 2020 docket as well.