9:00am: The two sides have finalized a one-year deal that promises Kendrick a $6.25MM guarantee, USA Today’s Bob Nightengale reports (Twitter link). It’s the same guarantee that Steve Pearce received from the Red Sox on the heels of his own postseason heroics following the 2018 World Series.

8:47am: The Nationals are “closing in” on a deal to bring postseason hero Howie Kendrick back to the team, Jesse Dougherty of the Washington Post reports (via Twitter). It’ll be a one-year deal with a mutual option for the Reynolds Sports client once completed, Ken Rosenthal of The Athletic tweets, adding that Kendrick spurned guaranteed two-year offers to return to Washington. 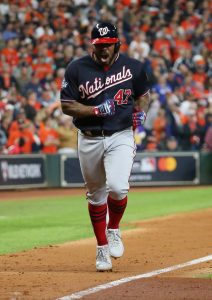 Kendrick, 36, has been nothing short of outstanding with the Nats over the past two seasons, hitting a combined .331/.375/.541 with 21 homers, 37 doubles and a triple through 530 plate appearances. With Ryan Zimmerman, Matt Adams, Brian Dozier and Asdrubal Cabrera all entering free agency, the Nats have some uncertainty at first base and second base, making a reunion with Kendrick a rather sensible pursuit.

Of course, as good as Kendrick has been during the regular season, it was his postseason heroics that truly endeared him to fans and entrenched his place in franchise lore. Kendrick’s 10th-inning grand slam against the Dodgers in the NLDS put Washington up for good and sent them toward a date with the Cardinals in the NLCS, where Kendrick was named the series MVP after hitting .333/.412/.600 in a four-game sweep. And in the World Series, it was Kendrick’s remarkable Game 7, opposite-field shot off the foul pole that put the Nationals ahead by a 3-2 margin they’d never relinquish.

Kendrick becomes the second member of the Nationals’ championship club to re-up on a new contract, joining catcher Yan Gomes, who agreed to a two-year, $10MM contract two weeks ago. The Nats still have bigger targets to address, as both Stephen Strasburg and Anthony Rendon are looming on the free-agent market, but Kendrick’s return shores up some infield needs and ensures that one of their most productive bats over the past two and a half seasons will remain in the fold.

Even with Kendrick aboard for another season, the Nationals’ 2020 payroll currently projects to about $132MM, while their luxury-tax considerations come in around $142MM (via Jason Martinez of Roster Resource). Viewed through that lens, it certainly seems as though the Nats have the payroll capacity to retain both Strasburg and Rendon, although owner Mark Lerner perhaps dubiously suggested otherwise yesterday in claiming his club could only afford to sign one of its two departing stars to a long-term deal. The Nats do have some pricey arbitration cases beginning to mount — Trea Turner is a second-time-eligible Super Two player in 2020 and Juan Soto will be eligible in 2021 — but Patrick Corbin is currently the only player the team has signed beyond the 2021 campaign.