The Nationals have agreed to re-sign free-agent catcher Yan Gomes to a two-year, $10MM contract, Jeff Passan of ESPN reports. The pact also contains award bonuses for the Jet Sports Management client, Mark Feinsand of MLB.com tweets. He’s the latest notable catcher to come off the board in the past week, joining Yasmani Grandal (four years, $73MM to the White Sox), Travis d’Arnaud (two years, $16MM to the Braves) and Stephen Vogt (one year, $3MM to the Diamondbacks) 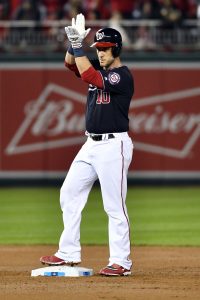 Gomes was one of the Nationals’ key pickups last offseason, when they acquired the 2018 All-Star in a trade with the Indians almost exactly one year ago (Nov. 30). While the Brazilian-born Gomes experienced his share of success in Cleveland, he wound up struggling somewhat during his first year in Washington. A poor first half doomed the 32-year-old to an uninspiring .223/.316/.389 batting line with 12 home runs in 358 plate appearances.

Behind the plate, Gomes did throw out 31 percent of would-be base-stealers, which ranked comfortably above the league-average mark of 26 percent, and establish himself as a favorite of star left-hander Patrick Corbin. Meanwhile, Baseball Prospectus assigned him above-average grades in the pitch-blocking department, but his framing left something to be desired.

It wasn’t a banner regular season for Gomes, nor was he an offensive hero in the playoffs, as he collected just seven hits (no home runs) in 29 at-bats. But he nonetheless received plenty of playing time behind the dish in the fall for the Nationals, who stunningly won their first-ever World Series title. Gomes and Kurt Suzuki divided reps at catcher from the beginning of the season through the end, and they figure to do the same in 2020 for a reasonable price.

The two-year, $10MM guarantee for Gomes matches the price the Nationals paid for Suzuki in free agency last season. It also represents a pay cut, at least on a per-annum basis, for Gomes. The Nats declined his $9MM option for next year shortly after their World Series triumph over the Astros.

While Washington’s catcher situation appears to be sorted out for next season, there’s plenty of other important business on the champions’ plate. The deep-pocketed franchise will presumably make a strong effort to re-sign two of the game’s premier free agents, third baseman Anthony Rendon and right-hander Stephen Strasburg. Not to be forgotten, the Nationals are also facing the departures of infielder Howie Kendrick, reliever Daniel Hudson and first baseman Ryan Zimmerman, among others.