DECEMBER 6, 6:32pm: The trade has been announced. The Rays will acquire a player to be named later to go with Renfroe and Edwards, with the Padres picking up Pham and Cronenworth.

2:00am: It appears the Rays will also land another prospect in the deal, per Juan Toribio of MLB.com.

12:27am: The Padres will also acquire minor leaguer Jake Cronenworth in the trade, Dennis Lin of The Athletic reports. The 25-year-old Cronenworth enjoyed an eminently successful year at the Triple-A level in 2019, when he hit .334/.429/.520 with 10 HRs and 12 steals in 406 trips to the plate. Cronenworth’s primarily a middle infielder, but the 2015 seventh-rounder can also pitch. He put up 7 1/3 scoreless innings with nine strikeouts and four hits allowed at the minors’ highest level in 2019, though the righty hurler did surrender eight walks.

DECEMBER 5, 10:55pm: The teams have agreed to the trade, Bob Nightengale of USA Today tweets. However, it won’t be announced until medical reviews of all the involved players are completed Friday.

10:42pm: The Rays and Padres are deep into talks on a trade that would see Tampa Bay outfielder Tommy Pham and San Diego outfielder Hunter Renfroe switch clubs, per Ken Rosenthal of The Athletic and Jeff Passan of ESPN. The Rays would also land Single-A shortstop Xavier Edwards, while the Padres would pick up an unnamed prospect to go with Pham. 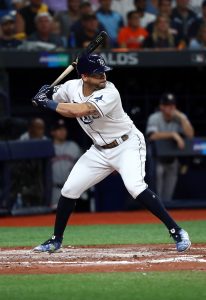 This is already the second major outfield trade of the winter for the Padres, who acquired Trent Grisham from the Brewers last week. Pham is far more proven than Grisham, as the former is coming off yet another outstanding season at the plate. The 31-year-old Pham, whose first full season came with the Cardinals in 2017, has somewhat quietly been among the majors’ most effective outfielders over the past three campaigns. He has totaled 13.6 fWAR, including 3.3 in 2019, dating back to his initial full season. Typically one to post high on-base percentages, Pham’s coming off a year in which he slashed .273/.369/.450 with 21 home runs and 25 stolen bases across 654 plate appearances.

In Pham, the Padres – led by under-fire general manager A.J. Preller – are getting a player with two years’ control remaining. Pham, who’s slated to earn a projected $8.6MM next season, will join Grisham, Manuel Margot, Wil Myers, Franchy Cordero and prospect Taylor Trammell as the Padres’ most prominent outfielders.

While Pham looks like an intriguing addition for the Padres, they’re giving up a powerful and affordable outfielder at the same time. Renfroe, soon to turn 28, entered the bigs as a first-round pick of the Padres in 2013. He has hit at least 26 homers in each season since debuting in earnest in 2017, including 33 this year, though injuries helped undermine him after a hot start in 2019. Renfroe wound up slashing .216/.289/.489 over 494 PA, and he earned elite marks in 998 innings divided among all three outfield positions (22 Defensive Runs Saved, 10.1 Ultimate Zone Rating). 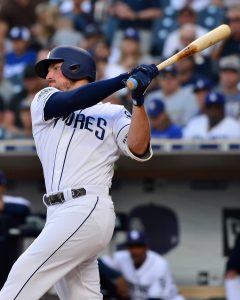 Never a team to boast a high payroll, the Rays are saving quite a bit of money in this swap. Renfroe should only make around $3.4MM next season, which will be his first of four arbitration-eligible years. He’ll presumably accompany Austin Meadows and Kevin Kiermaier as the Rays’ starting outfielders in 2020, thus replacing free agent Avisail Garcia.

Along with Renfroe, the Rays are getting a quality farmhand in Edwards, a 2018 first-rounder whom FanGraphs ranked as the Padres’ 14th-best prospect in a loaded Padres system back in May. Eric Longenhagen and Kiley McDaniel wrote then that Edwards “is a high-effort offensive catalyst who knifes at defenses with line drives and well-placed bunts,” adding that second base or center field could be in his future. The 20-year-old divided 2019 between both middle infield positions and batted .322/.375/.396 with just a single homer in 596 PA at the Single-A and High-A levels.