The Royals have reached agreement on a one-year deal with third baseman Maikel Franco, MLB.com’s Jon Heyman reports (via Twitter).  MLB.com’s Jesse Sanchez reported earlier today that Kansas City “emerged as the favorite” among the teams vying for the infielder, and a deal could be coming shortly.  Franco will earn $2.95MM in guaranteed money, with another $1.05MM available in incentives, as per Heyman.  Franco is a client of the Octagon agency. 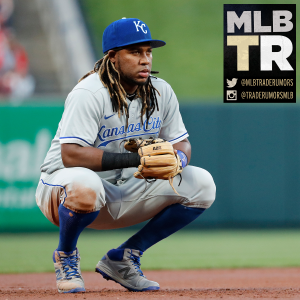 Once considered one of the game’s better prospects, Franco burst onto the scene by posting an .840 OPS over 335 PA for the Phillies in 2015, seemingly staking his claim to being Philadelphia’s third baseman of the future.  That hot start only led to intermittent success over the next four seasons, however, as Franco hit .247/.299/.427 with 88 homers over 2146 plate appearances from 2016-19.

With the Phillies impatient to return to contention and upgrade their third base situation, they parted ways with Franco this winter, non-tendering him rather than keep him on the roster.  Franco was projected to receive a $6.7MM arbitration salary in what would have been his third trip through the arb process.  He’ll now get less than half of that in Kansas City, though with the opportunity for some decent incentive bonuses and (more importantly) the chance to re-establish himself as a legitimate everyday player at the big league level.

The Nationals and Rangers were two other clubs known to have interest in Franco after he became a free agent, though since the Royals aren’t likely to be in contention this season, Franco will get a longer look than he would for other teams who might give him a shorter leash.

Interestingly, Franco’s addition would seemingly hint at a position switch for Hunter Dozier, who played 100 of his 139 games at the hot corner last season.  MLB.com’s Jeffrey Flanagan tweets that Dozier will move to right field, with Whit Merrifield moving to center field.  That would also seem to indicate that Jorge Soler is primed to spend much of his time as a DH next year, though Dozier also has experience playing first base.  (There’s also the possibility of a Soler trade, though the most recent reports suggest the Royals are more likely to hang onto Soler.)  Dozier was bound to remain a regular part of Kansas City’s lineup in the wake of his impressive 2019 season, though since he didn’t exhibit much glovework at third base, the Royals could now shift Dozier around between first base, right field, and DH.