TODAY: The Red Sox have officially announced the signing.

DEC.12: The Red Sox have reached a one-year, $6MM agreement with free-agent left-hander Martin Perez, Ken Rosenthal of The Athletic reports. The deal includes a $6.25MM club option for 2021. The buyout on that option checks in at $500K, according to Alex Speier of the Boston Globe. Perez is a client of OL Baseball Group LLC. 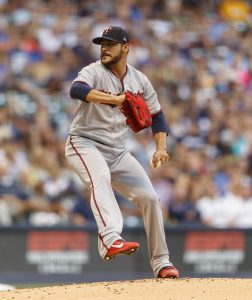 The agreement with Perez comes at a time when the Red Sox look to be shopping a much more prominent and far more expensive southpaw in David Price. As of now, though, the soon-to-be 29-year-old Perez is slated to join Price, Chris Sale, Eduardo Rodriguez and Nathan Eovaldi in a lefty-heavy Red Sox rotation.

Once a standout prospect with the Rangers, Perez is now amid a second straight offseason in which a team has turned down his club option for the following year. The Rangers cut Perez loose a winter ago on the heels of a horrid season for the hurler, while the Twins – who then inked him to a $3.5MM guarantee – did the same last month. Had the Twins retained Perez, he’d have earned $7.5MM. He’ll take home a bit less as a member of the Red Sox, but this still looks like a respectable payday in light of Perez’s showing in Minnesota.

While Perez did turn in 165 1/3 innings and 32 appearances (29 starts) as a Twin, he wound up with fairly pedestrian numbers. Despite career-high four-seam velocity (94.1 mph), the addition of a cutter to his repertoire and excellent hard-hit and exit velocity marks from Statcast, Perez finished with a 5.12 ERA and just 7.35 K/9 against 3.65 BB/9. ERA estimators such as FIP (4.66), xFIP (4.69) and SIERA (5.01) weren’t enamored of his work, though Perez did begin the year well. He owned a 4.26 ERA/3.71 FIP at the All-Star break, but the wheels came off during the second half of the season, in which Perez more closely resembled the pitcher the Rangers gave up on and notched a 6.27 ERA/5.94 FIP.

For the Chaim Bloom-led Red Sox, the agreement with Perez is the second one-year contract they’ve handed out Thursday. They previously inked infielder Jose Peraza to a $3MM guarantee. Both are modest signings in what most expect to be a low-key offseason for Boston, at least in terms of spending.