4:13pm: The Diamondbacks and Angels have announced the trade.

3:47pm: The Angels and Diamondbacks have agreed to a trade that will send right-hander Matt Andriese from Arizona to Anaheim, tweets MLB Network’s Jon Heyman. Minor league righty Jeremy Beasley is headed to the D-backs in the swap, per Robert Murray (Twitter link). The Athletic’s Zach Buchanan tweets that it’ll be a one-for-one swap of the two right-handers. Beasley isn’t on the 40-man roster, so the trade will drop Arizona to 39 players on its 40-man. 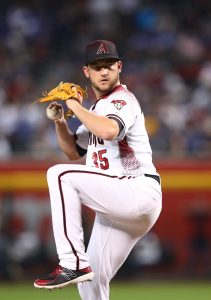 Andriese doesn’t throw especially hard, averaging 92.5 mph on his fastball this past season. But he does generate above-average spin rates on both his heater and his curveball, and opponents generally struggled to barrel the ball against him this past season (6.5 percent), which helped to limit his home run rate at a time when the rest of the league was serving up long balls at a record rate.

Although Andriese has experience as a starter with the Rays and even logged 127 1/3 innings for the Tampa Bay organization back in 2016, he’s been more heavily used as a reliever in recent seasons. However, Angels general manager Billy Eppler told reporters Tuesday that Andriese will be given a chance to win a rotation spot in Spring Training (link via MLB.com’s Rhett Bollinger).

If he doesn’t succeed, he’ll give the club a relatively affordable multi-inning relief option; Andriese settled on a $1.395MM salary for the upcoming season this past Friday. With four-plus years of Major League service time, he can be controlled through the 2021 season via arbitration.