TODAY: Gordon has agreed to waive his 10-and-5 no-trade rights beginning on June 16, as per The Associated Press.  Talking with MLB.com’s Jeffrey Flanagan and other reporters about the signing, GM Dayton Moore referred to the unusual provision as a way to “eliminate the red tape” and “take out the dynamics of going through the union” if a trade offer from a contender emerged.  Moore also implied that Gordon would still have an unofficial veto about any trade proposal, saying “anything we do with Alex, we would have a conversation with him first.  It’s really important to know that.  It’s always about the players….If you decide together at some point [that a trade] could benefit Alex, you want to have very easy conversations about things.”

JANUARY 22, 5:33pm: Gordon’s contract pays him an extra $500K upon reaching 250 plate appearances, tweets USA Today’s Bob Nightengale. There’s also a $500K assignment bonus in the event that he’s traded, although as a player with 10-and-5 rights, Gordon can veto any proposed swap.

9:15am: The Royals have struck a new deal with outfielder Alex Gordon, as first reported by MLB.com’s Jeffrey Flanagan (via Twitter). The pact is said to guarantee him $4MM for the 2020 season. Righty Heath Fillmyer was designated for assignment to create roster space. 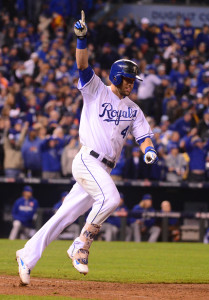 Gordon’s second free agent return to Kansas City comes with less drama and a much lower cost than did his prior one. The veteran previously inked a four-year deal in January of 2016, all but ensuring he’d never wear another uniform.

Entering the 2019-20 offseason, the only question was whether Gordon would decide to continue his career for an additional season. He and the K.C. organization decided upon at least one more.

That aforementioned contract hasn’t worked out at all from an on-field perspective. Gordon, who’ll soon turn 36, has yet to turn in even an average offensive campaign under the new deal. He carries an ugly .237/.320/.366 batting line over the four-season span.

While there was never any chance the Royals would pick up a high-priced option over Gordon, it’s not hard to understand the rationale for this move. The money, roster spot, and playing time surely could’ve been appropriated elsewhere, but every team needs some veterans around and the Royals are as familiar and comfortable with Gordon as any club could be with any player.