3:05pm: The Red Sox have now officially named Roenicke their interim manager, issuing a press release to announce the move. Speier tweets that the “interim” label will likely be shed as soon as MLB finishes its investigation into the 2018 Red Sox.

FEBRUARY 11, 12:32pm: The Red Sox are preparing to name Roenicke to the interim manager, Alex Speier of the Boston Globe reports on Twitter.

FEBRUARY 7, 10:57am: Adding another layer of intrigue, Ken Rosenthal of The Athletic tweets that the Red Sox also interviewed former Blue Jays manager John Gibbons earlier this week. Gibbons interviewed with the Astros before they hired Dusty Baker as well.

10:47am: The Red Sox issued the following statement in response to the report regarding Roenicke (Twitter link via MassLive.com’s Chris Cotillo): “Our managerial search is not yet completed. We will comment at the completion of the search.”

That, of course, doesn’t mean that Roenicke won’t ultimately be named manager, although it’s nevertheless notable that the team felt compelled to issue a statement without being prompted.

9:38am: The Red Sox are planning to name bench coach Ron Roenicke as manager, replacing the recently fired Alex Cora, the Boston Globe’s Peter Abraham reports (via Twitter). The Boston organization is waiting for the commissioner’s office to conclude its investigation into the team’s 2018 sign-stealing allegations before making a formal announcement, however. 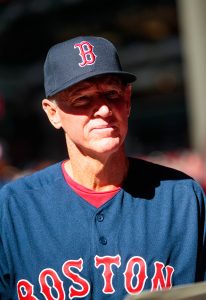 That the Red Sox are planning to promote him seemingly suggests that the organization doesn’t believe Roenicke played a significant role in the club’s 2018 transgressions and won’t face discipline from the league; Roenicke was Cora’s bench coach that season — his first year on the job in Boston.

Roenicke, 63, played in parts of eight big league seasons from 1981-88 and also has 18 seasons as a Major League coach and five as a Major League manager on his resume. He served as the Brewers’ manager from 2011-15, although he was dismissed from that post just 25 games into his final season at the helm. (Milwaukee hired current skipper Craig Counsell to replace him.) Despite that ousting, it’s worth noting that Roenicke’s Brewers posted a winning record in three of his four full seasons as manager, including a 96-win effort in 2011 that saw the club last until Game 6 of the National League Championship Series.

With the league expected to formally conclude its investigation in the near future, an announcement on Roenicke may not be too far off. The dugout veteran will be stepping up into a delicate and tumultuous situation, so it’s not especially surprising to see the Red Sox opt for someone who both knows the players in the clubhouse and has experience working as a big league manager in the past. The Sox also reportedly interviewed Athletics quality control coach Mark Kotsay, D-backs bench coach Luis Urueta and their own third base coach Carlos Febles, but Roenicke is the lone known candidate who has previously run a Major League team at the field level. He’ll no doubt face some tough questions if and when he’s formally promoted, although the exact timing on conclusion of the league’s investigation obviously can’t be known.

The managerial change will be the latest step in what would’ve been an unfathomable shakeup just 16 months ago. The Red Sox, of course, won the 2018 World Series in Cora’s first season as a big league manager and in now-former president Dave Dombrowski’s third full year running the club’s baseball operations outfit. With a talented core of veterans and several key young talents emerging at the MLB level — Rafael Devers and Andrew Benintendi among them — the Sox appeared poised for another lengthy run as one of the game’s premier teams. Barely a year later, both Dombrowski and Cora are out, however, and the team is in the process of trading arguably its best player of the current generation in a poorly veiled ploy to duck under the luxury tax barrier. Former Rays senior vice president Chaim Bloom was brought in as the club’s chief baseball officer, and he’ll now work with Roenicke — at least for the 2020 season — in an effort to steer the Sox out of what has become one of the rockiest years in the franchise’s storied history.