7:24pm: Betts’ contract includes a massive $65MM signing bonus, Joel Sherman of the New York Post reports (via Twitter). The Athletic’s Ken Rosenthal adds that the contract contains $115MM in deferrals, and the salaries are backloaded such that Betts will be paid $17.5MM in 2021 and 2022. There are no opt-outs in the deal, which does not come with a no-trade clause, per Rosenthal.

4:01pm: Mookie Betts is a Dodger for the long haul. The team announced this afternoon that Betts has signed a 12-year extension through the 2032 season. It’ll reportedly guarantee him a whopping $365MM in new money on top of this year’s $27MM salary (which has been prorated to $10MM due to the shortened 2020 season). Betts is represented by the VC Sports Group. 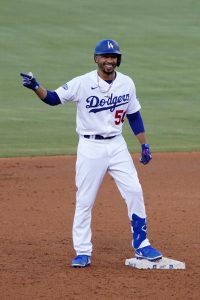 The contract represents the largest amount of new money ever promised to a Major League player on an extension or free-agent signing, topping Mike Trout’s previous highwater mark of $360MM (over a shorter 10-year term). Trout was already signed at two years and $66.5MM, so his total of 12 years and $426.5MM tops Betts’ 13-year, $392MM figure, but the $365MM new-money benchmark is a notable record nevertheless.

The Betts extension, somewhat remarkably, marks the first time that the Dodgers have guaranteed in excess of $100MM to a player under president of baseball operations Andrew Friedman. Though the team is known for its enormous — at times seemingly limitless — spending capacity, the Friedman regime has worked diligently to shed some prior undesirable commitments and creatively limbo underneath the luxury-tax bar. Doing so paved the way for the Dodgers to issue a historic contract to a premium talent.

After missing out on a free-agent pursuit of Gerrit Cole this winter, the team shifted its focus to acquiring Betts, who came to L.A. alongside David Price in a blockbuster trade that sent Alex Verdugo, Jeter Downs and Connor Wong to Boston. There was plenty of talk about the team’s hope for extending Betts, but he’d been outspoken about his desire to test the open market. Paired with the economic uncertainty stemming from this year’s unprecedented revenue losses, there was real reason to wonder whether a deal would get done.

Perhaps that economic turmoil made Betts more amenable to taking a deal now rather than testing the market, or perhaps he was simply willing all along to sign if a team exceeded Trout’s new-money guarantee. His exact thinking likely won’t ever be fully known, but the end result is that Betts now appears poised to spend the remainder of an already excellent career in Dodger blue.

Still just 27 years of age, Betts has produced at star-caliber levels since a 52-game MLB debut back in 2014. A career .301/.379/.519 hitter, Betts is already a four-time All-Star, a three-time Silver Slugger winner, a former American League MVP and batting champion, and a four-time Gold Glove winner. He’s clubbed 139 home runs and swiped 126 bases in 794 Major League games, showing off an impressive blend of power and speed, and his 13.5 percent walk rate over the past two seasons is nearly the same as his paltry 14.5 percent strikeout rate. Add in that Betts is regarded as an otherworldly defender — he’s third among all players in Defensive Runs Saved since 2015, regardless of position — and it’s easy to see why Betts is regarded among the game’s elite players.

The Dodgers already boasted at least one of those elite talents: reigning NL MVP Cody Bellinger. Betts and Bellinger will pair to form what could be baseball’s best one-two punch for at least the next four seasons, as Bellinger is controlled through at least the 2023 season. Out-of-nowhere slugger Max Muncy is also inked through the ’23 campaign on a highly reasonable three-year, $26MM pact, so that trio should continue thriving in the heart of the order for the foreseeable future. The hope is that rising young talents like infielder Gavin Lux and catcher Will Smith will add to that long-term core. Looking shorter-term, the Dodgers are stacked with above-average contributors, including Corey Seager (controlled through 2021), Justin Turner (through 2020), Chris Taylor (through 2021) and Enrique Hernandez (through 2020).

From a payroll and luxury-tax standpoint, the Dodgers can afford to both sign Betts and still pursue a megadeal with Bellinger, should they see fit. Betts’ contract comes with a $30.4MM annual luxury hit (or $30.1MM, if they roll it into the current deal), which is sizable but still only represents about a seventh of next year’s $210MM luxury cap. (That number could well rise in 2021 CBA negotiations, too.) Los Angeles already has more than $152MM in luxury commitments on the 2021 books, including this new deal for Betts, but that number plummets to $73MM in 2022. Betts is the only Dodger on a guaranteed deal for the 2023 season (although Bellinger, Walker Buehler and Julio Urias will all be arbitration-eligible).

With today’s agreement, Betts, Bellinger and Buehler look like the long-term faces of the Dodgers franchise, though the club has boundless young talent, a knack for high-profile trades and as previously noted, plenty of money to spend even with Betts pulling in more than $30MM on an annual basis. The Dodgers have won seven straight NL West titles, and the Betts deal is a strong step toward continuing that trend. That, of course, won’t be enough to satisfy Betts, though. As the star put it during today’s introductory press conference: “I’m here to win some rings.”

WEEI’s Lou Merloni reported earlier today that Betts was closing in on an extension worth more than $300MM. ESPN’s Jeff Passan reported the agreement and the terms just prior to the team’s announcement (Twitter thread).