The Giants have promoted top catching prospect Joey Bart to the Majors, per a club announcement. The No. 2 overall pick in the 2018 MLB draft, Bart will make his debut one day after 2018 No. 1 overall pick Casey Mize debuted with the Tigers. 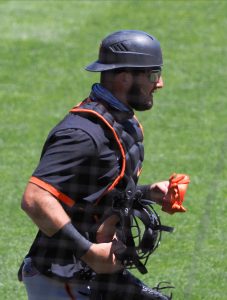 Defensively, there’s little doubt about Bart’s abilities behind the dish. Scouting reports at MLB.com and FanGraphs place a 60 and potential 70 grade on his glovework, and Bart was voted ACC Defensive Player of the Year in his final season with Georgia Tech. Scouting reports laud his framing and pitch-blocking abilities, and Bart carried a career 31 percent caught-stealing rate in the minors before thwarting nine of the 13 stolen-base attempts against him in last year’s Arizona Fall League.

All in all, Bart is career .284/.343/.532 hitter in the minors, and he has the defensive tools to make him one of baseball’s premier all-around backstops. He’s yet to see a pitch in Triple-A and has only 87 Double-A plate appearances under his belt, so it’s far from a given that he’ll immediately thrive against big league pitching. However, with the Giants hitting just .250/.314/.415 as a team (17th in the Majors in wRC+) — with much of that coming from Mike Yastrzemski — Bart doesn’t need to be an offensive juggernaut to provide a boost.

San Francisco catchers, in particular, have floundered at the dish. The trio of Tyler Heineman, Chadwick Tromp and Rob Brantly (who saw only three plate appearances) have combined for a .180/.227/.270 slash in the absence of stalwart Buster Posey. The veteran Posey opted out of the 2020 season, citing health concerns, after he and his wife adopted twin daughters who were born prematurely.

Bart ranked as baseball’s No. 7 overall prospect heading into the 2020 season, per ESPN’s Kiley McDaniel. He’s currently No. 8 on FanGraphs’ top 100, No. 15 at MLB.com and No. 33 at Baseball America. The Athletic’s Keith Law pegged him 44th prior to the season. Baltimore’s Adley Rutschman, the No. 1 overall pick in 2019, is the only catching prospect that is generally ranked on the same level as Bart, who is the heir-apparent to the aforementioned Posey and expected to be a fixture on the Giants’ roster for years to come.

By waiting until this point in the year to promote Bart, the Giants have ensured that he can’t become a free agent until after the 2026 season (at least), and they’ve likely avoided Super Two status as well. There are only 39 days remaining in the 2020 season, and each of those days counts for about 2.77 days of Major League service in this year’s prorated system. That leaves Bart with roughly 108 days of MLB service time to possibly accrue in 2020, which should comfortably leave him shy of Super Two designation when he approaches his arbitration years.

Andrew Baggarly of The Athletic reported just before the Giants’ announcement that Bart was on his way to the big leagues.