The future is here in Detroit. The Tigers announced this morning that the organization will promote top prospects Casey Mize, Tarik Skubal and Isaac Paredes this week. The left-handed Skubal is slated to start Tuesday’s game, while the right-handed Mize will take the ball Wednesday. Paredes will take the spot of fellow infielder Dawel Lugo, who is being designated for assignment.

It’s an aggressive play by a Tigers club that has dropped five consecutive games to fall under .500 (9-10) after a surprising start to the season. Skubal and Mize will make their MLB debuts in key starts against the division-rival White Sox, who have overtaken the Tigers in the standings. Detroit is currently in fourth place — but still just 3.5 games back of the AL Central-leading Twins. 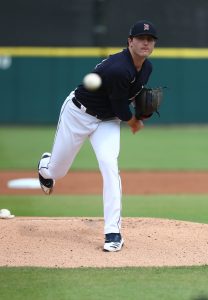 In Mize, the Tigers will get their first look at the No. 1 overall pick in the 2018 draft. The former Auburn ace is considered one of the five best pitching prospects in baseball by most accounts, and his results in 2019 — his only full pro season to date — underscore just why he’s so highly regarded. The 6’3″, 220-pound Mize tossed 109 1/3 innings between Class-A Advanced and Double-A last year, pitching to a combined 2.55 ERA with a 106-to-23 K/BB ratio. Those numbers include a no-hitter in his debut effort at the Double-A level.

Mize, 23, is currently ranked as the No. 8 prospect in the game on MLB.com’s summer update. Baseball America and FanGraphs have him ranked 14th on their own summer lists — the same slot at which Kiley McDaniel placed Mize in his preseason rankings for ESPN. Mize draws praise for a mid-90s heater that he can run up to 97 mph, but his splitter is the pitch that generates the most love from scouts. MLB.com’s report on him places a 70-grade on the pitch (on the 20-80 scale). Mize’s slider and cutter are both considered above-average offering as well.

Skubal was drafted eight rounds later in the same draft that the Tigers selected Mize, and his ascension should be considered a feather in the cap of the Tigers’ scouting and player development teams. Also 23, Skubal himself is widely considered to be a Top 100 prospect. Those same publications list him 35th (Baseball America), 50th (MLB.com), 54th (FanGraphs) and 79th (ESPN) on their rankings, and The Athletic’s Keith Law pegged him as high as No. 24 prior to the season. 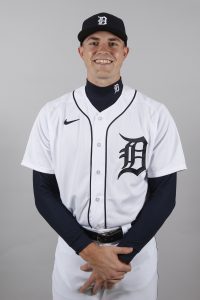 Just as Mize did, Skubal split last season between Class-A Advanced and Double-A. The 23-year-old racked up 122 2/3 innings with an outrageous 179-to-37 K/BB ratio — including a whopping 82 strikeouts in 42 1/3 frames at the Double-A level. Skubal can run his heater up to 97 mph as well, and while he doesn’t have a pitch as highly regarded as Mize’s splitter, his curveball is still said to be a plus offering accompanied by an average-or-better slider and changeup.

Not to be lost in the shuffle, the 21-year-old Paredes was a Top 100 farmhand himself at Baseball America in each of the past two offseasons (though he dropped off their list following the addition of this summer’s top draftees). He played the 2019 season at 20 years old and was one of the youngest players in the pitcher-friendly Double-A Eastern League. However, Paredes still turned in a healthy .282/.368/.416 slash (133 wRC+). Bat-to-ball skills are Paredes’ best asset, as evidenced by the fact that against much older competition, he walked nearly as many times (57) as he struck out (61). 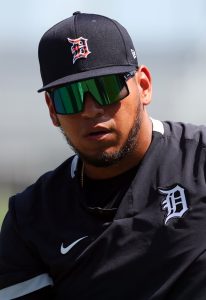 With C.J. Cron out for the year, Jeimer Candelario has slid over to first base. That should clear a path to regular reps at the hot corner for Paredes, which is where he spent the bulk of the 2019 season playing. Paredes, acquired alongside Candelario in the trade that sent Justin Wilson and Alex Avila to the Cubs, played shortstop for much of his early career in the minors, so he could see some time there as well if Niko Goodrum needs a day off. Alternatively, the club could opt to give Paredes and Willi Castro regular time on the left side of the infield, with Goodrum returning to the super-sub role in which he found success over the past couple seasons.

The timing of the promotions is of some note as well. Holding the trio down for even the first week of the season bought the Tigers an extra year of team control, and each of Mize, Skubal and Paredes has now been down long enough that they could fall shy of Super Two status as well. Paredes’ promotion is the only move that is official as of today. Skubal and Mize will have their contracts selected on the day of their respective starts.

The 25-year-old Lugo,meanwhile, is could be on his way out the door in the Detroit organization. Acquired from the Diamondbacks in the trade that sent J.D. Martinez to Arizona, Lugo simply hasn’t found his footing at the MLB level. He’s received an even 400 plate appearances in parts of three seasons and saw semi-regular action last year (288 plate appearances), but Lugo has produced only a .236/.270/.358 output in that time. He’s out of minor league options, so it’s possible he’ll clear waivers given that another club would have to carry him on its MLB roster. Then again, Lugo was once a solidly regarded prospect and has the ability to play both second base and third base, so another club could take a speculative look on waivers.

The Tigers have a week to either trade Lugo, release him, or pass him through outright waivers.