Jan. 18: Bradley has passed his physical, and the contract has been formally announced by the Phillies.

Jan. 14: The Phillies are signing free-agent reliever Archie Bradley, Ben Nicholson-Smith of Sportsnet tweets. It’s a one-year, $6MM pact for the right-hander, according to Mark Feinsand of MLB.com. Alden Gonzalez and Jeff Passan of ESPN.com were first to report that Bradley was nearing a deal with a team. Bradley is a client of BBI Sports Group. 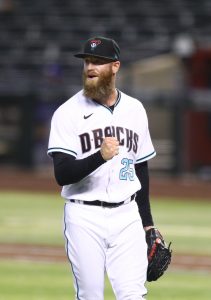 Bradley has been on the open market since the Reds non-tendered him Dec. 2 in lieu of paying him a projected $4.3MM to $5.7MM in arbitration. The move was particularly surprising when combining Bradley’s solid track record with the fact that the Reds acquired him from the Diamondbacks for two players – utilityman Josh VanMeter and young outfielder Stuart Fairchild – at last August’s trade deadline.

The Bradley trade did pay off initially for Cincinnati, as he gave the playoff-bound club 7 2/3 innings of one-earned run ball with six strikeouts, no walks and four hits allowed during the regular season. Bradley didn’t fare as well in his lone playoff appearance, though, surrendering the only run in a 13-inning defeat to the Braves in Game 1 of a wild-card round that Cincy went on to lose.

The seventh overall pick of the Diamondbacks in 2011, Bradley was regarded as a premium prospect over the ensuing few years, But he couldn’t put it together as a big league starter in Arizona from 2015-16. The proverbial light bulb went on the next season when the Diamondbacks shifted Bradley to their bullpen. Bradley enjoyed a serious increase in velocity that year (from 92 mph-plus to upward of 96) and pitched to a 1.73 ERA across 73 innings. Although Bradley’s results weren’t as dominant from 2018-19, he continued to keep runs off the board at a good clip while eating innings (over 70 in both seasons) and throwing better than 95.

Bradley’s average fastball velo dipped to around 94 last year, but it was still one of his most effective seasons yet. The 28-year-old notched a 2.95 ERA/3.44 SIERA and recorded a 24.7 percent strikeout rate with a personal-best 4.1 percent walk rate in 18 1/3 innings. Bradley’s 9.4 percent swinging-strike rate was a bit above his career average of 8.7, while the .274 weighted on-base average he allowed wasn’t too far from his .297 expected wOBA.

Now with the Phillies, his third organization, Bradley should provide some much-needed help to a bullpen that helped cost the team a playoff berth in 2020. The Phillies’ relief corps finished last in the majors in ERA (7.06), and the tandem of new president of baseball operations Dave Dombrowski and general manager Sam Fuld have tried to improve the group with the acquisitions of Bradley, Jose Alvarado, Sam Coonrod and Ian Hamilton this winter.