JANUARY 20: The Jays have announced the signing.

JANUARY 19, 7:54pm: Yates will receive a $5.5MM guarantee with up to $4.5MM in performance bonuses, Ben Nicholson-Smith of Sportsnet reports.

4:31pm: The Blue Jays and free-agent reliever Kirby Yates have agreed to a contract, pending a physical, Ken Rosenthal of The Athletic reports. Jon Heyman of MLB Network tweeted earlier Tuesday that the two sides were nearing a deal. Yates is a Beverly Hills Sports Council client. 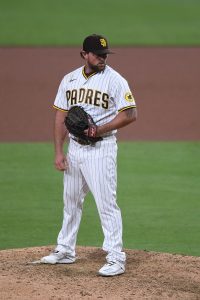 This could be an enormous pickup for the Blue Jays’ bullpen, but it will depend on how well Yates bounces back from the bone chips in his right elbow that limited him to 4 1/3 innings last year. Yates was arguably the premier reliever in the majors during the prior two years, in which he combined for 123 2/3 innings of 1.67 ERA pitching with a 32.7 K-BB percentage that ranked third among relievers during that span. Yates also racked up 53 saves then, including an NL-high 41 in 2019, and earned the lone All-Star nod of his career.

The Padres likely could not have imagined Yates experiencing the type of success he enjoyed in their uniform after claiming him off waivers from the Angels early in 2017. It wasn’t the first underdog experience for the 33-year-old Yates, a former undrafted free agent who failed to establish himself with the Rays and Yankees earlier in his career.

Now, if a deal between him and Toronto comes to fruition, Yates will return to the AL East to join bullpen that ranked near the bottom of the majors (24th) with a 4.71 ERA last season. The Blue Jays have since seen relievers Anthony Bass, Ken Giles and Wilmer Font reach free agency, though only Bass was an effective part of their bullpen a season ago. Giles entered last year as the club’s closer before dealing with serious injury issues of his own, but Yates may take his place during the upcoming season if he’s healthy. Regardless, Yates joins fellow righty Tyler Chatwood as the second notable bullpen addition Toronto has made this week.