9:15pm: The teams have announced the deal.

8:35pm: The Blue Jays and Mets are closing in on a swap that would send lefty Steven Matz to Toronto, per Jeff Passan of ESPN.com (via Twitter). Robert Murray of Fansided tweeted that a trade between the clubs was coming; Michael Mayer of Metsmerized had tweeted that a Matz move was in the works. 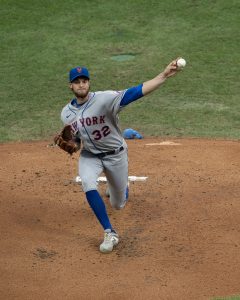 Three right-handed pitchers will head back to New York in the arrangement: Josh Winckowski, Sean Reid-Foley, and Yennsy Diaz. (Via Murray, on Twitter, and Ben Nicholson-Smith of Sportsnet.ca, also via Twitter.)

Matz, 29, is due $5.2MM after agreeing to avoid arbitration. He will qualify for free agency after the 2021 campaign. The Mets obviously determined they could better allocate that salary for other needs. Whether it’ll be part of a big payout to lure Trevor Bauer remains to be seen; there’s still no reason to believe anything is imminent on that front.

While he has at times featured as a high-quality big-league starter, Matz has had his share of difficulties of late. The Long Island native wraps up a six-year run with the Mets having thrown 579 2/3 innings of 4.35 ERA ball.

That unfortunate short-season effort came with a few bright spots. Though Matz surrendered a ton of hard contact, he also managed a career-best 25.4% strikeout percentage while delivering his sinker at an average of 94.5 mph.

Clearly, the Jays believe Matz still possesses the necessary physical tools to deliver a good number of useful innings. He’ll likely have a chance to battle for a rotation spot in camp, though the team could also plan to use him in a swingman or even pure relief capacity.

The Mets will get some reward for deciding to tender Matz a contract. None of the three arms acquired come with high-grade prospect billing, but each will have a chance to contribute in the near term.

Both Reid-Foley and Diaz have debuted in the majors, meaning they also occupy 40-man roster spots (albeit with options remaining). The former threw 71 2/3 innings of 4.40 ERA ball over three seasons with the Jays, carrying a suboptimal 76:48 cumulative K/BB ratio. Diaz has just one appearance to his name, but turned in a solid showing at the Double-A level in 2019.

As for Winckowski, he’s still due for further seasoning. The 22-year-old reached the High-A level in 2019. Over 127 1/3 total frames that year, he turned in a sturdy 2.69 ERA. Winckowski will (again) be eligible for the Rule 5 draft after the 2021 campaign.