The Marlins have added another arm to their bullpen, announcing on Thursday that they’ve signed free-agent right-hander Anthony Bass to a two-year contract with a club option for a third season. Bass, a client of the Beverly Hills Sports Council, will reportedly be guaranteed $5MM over that two-year term. 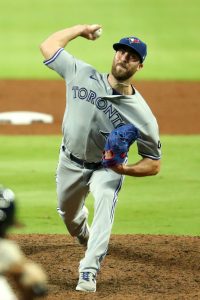 Miami has been known to be in the market for affordable bullpen upgrades for some time now, and the 33-year-old Bass fits the bill. The righty had an unspectacular five-year run with the Padres, Astros and Rangers from 2011-15 before heading to Japan for two seasons, where he took his game to new heights.

The Marlins will be the fourth team in four seasons for Bass, but over the past three years he’s emerged as a solid late-inning arm. In that time, he’s pitched to a combined 3.44 ERA with a 3.89 SIERA, a slightly below-league-average strikeout rate (22.2 percent) and a slightly better-than-average walk rate (8.2 percent). He tallied five saves and six holds with the Mariners in 2019 before saving seven games and notching three holds in Toronto last year. He hasn’t had a full season as a set-in-stone closer or go-to setup man, but he could be afforded just that type of opportunity with the Marlins in 2021.

Like the Marlins’ 2020 closer, Brandon Kintzler, Bass is a ground-ball specialist whose primary offering is a power sinker in the 95 mph range. He induced grounders at a career-best 62.3 percent in 2020 — a mark that ranked fourth-highest among the 323 pitchers to throw at least 20 big league innings.

Bass also matched a career-high with an 11.5 percent swinging-strike rate, and he graded out quite well in most key Statcast metrics; the right-hander ranked in the 95th percentile or better in terms of opponents’ barrel rate, expected batting average against, expected slugging percentage, expected ERA and expected wOBA. His sinker sat in just the eighth percentile in terms of spin rate, which is actually a good trait for sinkers, where low spin is preferable (as opposed to high spin on a four-seamer).

The Marlins’ bullpen, as it stands, is a relatively inexperienced group, though Bass and fellow offseason signing Ross Detwiler add a pair of veteran arms to the mix. They, along with right-hander Yimi Garcia and lefty Richard Bleier, are the only Miami relievers with at least 150 big league innings under their belts.

Roles in the Miami ’pen will surely be defined this spring, but given the multi-year deal promised to Bass, he should join Garcia as one of the favorites to hold down ninth-inning duties. Further additions could yet lend some clarity to the ninth-inning picture in Miami, and Mish tweets that he expects Miami to continue adding to the ’pen.