The Athletics added some left-handed pop to their lineup, announcing on Tuesday that they’ve signed first baseman/designated hitter Mitch Moreland to a one-year deal. The Paragon Sports International client will reportedly be guaranteed $2.25MM on the deal and can earn another $250K worth of incentives. 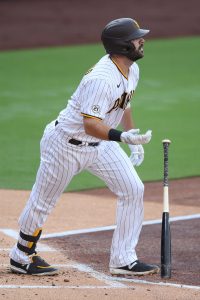 Moreland may be 35 years old, but he’s turned in the best work of his career at the plate over the past two seasons. In 487 plate appearances between the Red Sox and Padres in that time, Moreland has slashed .256/.333/.521 with 29 home runs, 26 doubles and a triple. He’s also boosted his walk rate north of 10 percent in the past few years after previously sitting around seven percent for the bulk of his career, and the uptick in power and free passes hasn’t come with any discernible increase in strikeouts (21.8 percent).

At this point in his career, Moreland’s glovework likely isn’t as good as it was at its Gold Glove peak, but that’s not much of an issue in Oakland, where Matt Olson is among the game’s best defenders at the position. He’ll give them a veteran with a solid defensive track record in the event that Olson misses any time, but Moreland figures to see time as the primary designated hitter for the A’s now that Khris Davis has been traded to Texas in a trade that brought Elvis Andrus to Oakland.

Moreland has never hit left-handed pitching well and is typically shielded from facing southpaws too much, so he’ll likely be deployed in a platoon setting. The A’s don’t have an obvious right-handed-hitting platoon partner at the moment — Chad Pinder likely in a platoon at second base — so it’s possible they could yet look to the market to bring in an affordable righty bat or switch-hitter to pair with Moreland.

Moreland joins Trevor Rosenthal, Yusmeiro Petit and Sergio Romo as recent additions on one-year deals, bringing the Oakland payroll up to a still-modest $85MM in total. It had been a near-silent offseason for the A’s, but it seems their ability to shed the Davis contract and a flooded free-agent market still full of veterans seeking deals has pushed ownership to begin spending a bit.