FEB 8: Doolittle has officially signed with the Reds, per MLB.com’s Mark Sheldon (via Twitter).

FEB 2: The Reds are moving toward an agreement with free-agent reliever Sean Doolittle, according to C. Trent Rosecrans and Ken Rosenthal of The Athletic (Twitter link). The two sides are in agreement on a one-year deal for the 2021 season, reports MLB.com’s Jon Morosi (via Twitter). Doolittle’s deal is worth $1.5MM in guaranteed money, according to Jon Morosi, plus performance bonuses. 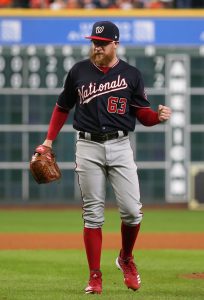 Doolittle, 34, has spent the past three and a half seasons with the Nationals, leading the team with 75 saves over that stretch. Along the way, he’s pitched to a 3.03 ERA and 3.40 SIERA with very strong strikeout and walk rates: 28.2 percent and 5.7 percent, respectively.

The 2020 season didn’t go well for Doolittle, as he was hampered by both a knee injury and an oblique strain. That pair of injuries combined to limit Doolittle to just 7 2/3 innings, during which time he yielded five earned runs on nine hits and four walks (two intentional) with six punchouts. His average fastball velocity dropped from 93.5 mph in 2019 to 90.7 mph in 2020.

While it was an ugly year for the lefty, Doolittle is still a two-time All-Star with a lengthy track record of success. A converted first baseman, Doolittle made debuted on the mound with the A’s in 2012 and went on to log 398 innings with a composite 3.02 ERA and 2.71 SIERA through the end of the 2019 season.

Doolittle played an integral role in the Nationals’ World Series run that year, standing out as one of the few members of the bullpen that manager Dave Martinez trusted in high-leverage spots. Doolittle pitched 10 1/3 innings in the 2019 playoffs, allowing just two runs on six hits and a walk with eight strikeouts. He held the Astros scoreless in three innings of work during the World Series.

If a deal ultimately comes together, Doolittle would provide the Reds with some badly needed left-handed help in the bullpen. It’s possible that he could be in the mix for saves in Cincinnati, given his track record, but he’ll more importantly give manager David Bell a second southpaw alongside Amir Garrett (another closer candidate). Doolittle and Garrett would be the only two left-handed locks for the bullpen, though recently acquired Cionel Perez could be a third option if they opt to use him out of the ’pen rather than as a starter. The Reds will also have Josh Osich and Jesse Biddle in camp this spring, but they’re on minor league deals and would need to earn a spot on the 40-man roster.

More broadly, a deal with Doolittle would be the first Major League addition to the Reds’ roster all winter. The club technically added right-hander Noe Ramirez as well, but they only did so in the trade that more or less dumped former closer Raisel Iglesias’ $9.125MM salary on the Angels. The Reds have also non-tendered Archie Bradley and Curt Casali in somewhat surprising fashion.

General manager Nick Krall has spoken of reallocating the savings from that series of subtractions, although the prevailing wisdom until recently had been that the Reds would try to do so at the shortstop position. Top free agents Ha-Seong Kim, Marcus Semien, Andrelton Simmons and Didi Gregorius all signed elsewhere, however, leaving the free-agent market without a clear, starting-caliber option at the position. The Reds could still look to the trade market for an option at short, but it seems that with the top names at that position off the market, they’ll at least spend a bit cash to address other areas of need.