The Yankees have traded outfielder Mike Tauchman to the Giants for left-handed reliever Wandy Peralta, Jack Curry of the YES Network reports. New York will also receive a player to be named later, the team announced. 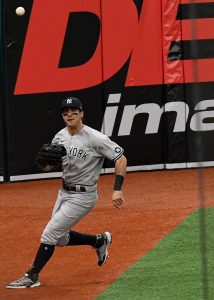 This deal sends the 30-year-old Tauchman back to the National League West, where the former 10th-round pick played with the Rockies from 2017-18. Tauchman was unable to establish himself in Colorado, which traded him to the Yankees for lefty Phillip Diehl shortly before the 2019 season.

At first, the Tauchman pickup looked like a steal for the Yankees, as he appeared in 87 games as a reserve in his initial year with the team and slashed a terrific .277/.361/.504 with 13 home runs, six steals and 2.6 fWAR over 296 plate appearances. Tauchman blended that offensive performance with great work among all three outfield positions, combining for 19 Defensive Runs Saved in the grass.

While the 2019 version of Tauchman was a gem, his production and playing time have significantly dwindled since then. Tauchman did appear in 43 games and total 111 PA last season, but he failed to hit a homer, batted a below-average .242/.342/.305 and essentially broke even in the field with zero DRS and a minus-2.2 Ultimate Zone Rating. Meanwhile, fellow Yankees outfielders Aaron Judge, Clint Frazier, Aaron Hicks and Brett Gardner each recorded far superior production, which helped lead Tauchman to fall out of favor.

With Judge, Frazier, Hicks and Gardner returning, Tauchman became an afterthought for the Yankees this year. So far, he has picked up a meager 16 trips to the plate and batted .214/.267/.286 without a homer. Now, the out-of-options Tauchman will provide versatile depth in a Giants outfield that has used Mike Yastrzemski (though he’s currently dealing with a mild oblique issue), Austin Slater, Alex Dickerson, Mauricio Dubon and Darin Ruf, among others, this season. Tauchman won’t reach arbitration for the first time until the upcoming winter, so he could be a multiyear piece for the Giants if he performs to their liking this season.

Peralta, 29, started his career in 2016 with the Reds, who lost him on waivers to the Giants late in the 2019 campaign. Despite 95-96 mph fastball velocity and a career 50.4 percent groundball rate, Peralta has typically had trouble keeping runs off the board. Through 192 2/3 innings, including 8 1/3 this season, Peralta has recorded a 4.72 ERA/4.58 SIERA with unspectacular strikeout and walk percentages of 18.5 and 10.8, respectively.

Peralta still has a minor league option remaining, though he’ll only be eligible for arbitration one more time. For now, Peralta will give the New York organization a third southpaw relief option behind closer Aroldis Chapman and Lucas Luetge. The Yankees have had to go this season without key lefty setup man Zack Britton, who’s on the mend from arthroscopic elbow surgery and probably won’t return until the summer.