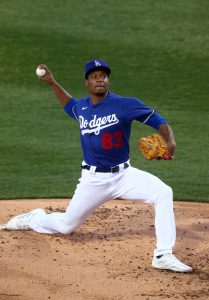 Selected by the Reds in the second round of the 2018 draft out of Division II Le Moyne College, Gray was traded to Los Angeles a few months later as part of the deal that sent Yasiel Puig to Cincinnati. The following season, he emerged as one of the game’s better pitching prospects. He dominated across three minor league levels in 2019, demonstrating a three-pitch mix and surprisingly advanced command for a player who didn’t convert to pitching full-time until his final season at Le Moyne.

Entering the year, Gray appeared on the top 100 prospect lists of each of Baseball America, Eric Longenhagen of FanGraphs and Keith Law of the Athletic. Longenhagen was the most bullish of that trio, slotting the 23-year-old as the #29 prospect leaguewide. In his scouting report, Longenhagen raved about Gray’s repertoire and strong fastball command, noting that he projects to be a “mid-rotation stalwart” at his peak. BA and Law echoed those sentiments, pointing to Gray’s continued development of his secondary pitches and strong understanding of pitching as reasons for optimism he’ll continue to improve.

Gray has reached Triple-A Oklahoma City for the first time this year, but a shoulder injury sidelined him for two months. He’s only made four appearances because of that, but Gray’s shown no difficulty adapting to the minors’ highest level. He’s allowed just five runs across 15 2/3 innings, striking out 22 while issuing a pair of walks.

Adding rotation help before the July 30 trade deadline figures to be a priority for the Dodgers. Los Angeles trails the Giants by one game in a tightly-contested NL West. Gray pitching well right out of the gate would go a long way towards stabilizing the starting staff, although that’ll likely be a target area for president of baseball operations Andrew Friedman and his front office regardless of Gray’s early performance.

Even if Gray is in the majors for good, he won’t reach free agency until the conclusion of the 2027 season. He’s not slated for arbitration eligibility until the 2024-25 offseason. Future optional assignments could push back that service time projection.