The Padres are taking a flier on Jake Arrieta, announcing a deal with the veteran right-hander this afternoon. While San Diego technically inked Arrieta to a minor league contract, the club announced they plan to formally select him to the big league roster on Wednesday, when he’ll get make his team debut with a start against the Rockies. San Diego already has a vacancy on the 40-man roster, so they won’t need to make a corresponding move in that regard unless they add somebody to the roster in the intervening two days. Arrieta is repped by the Boras Corporation. 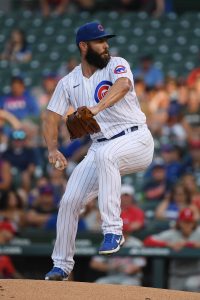 San Diego suddenly finds itself desperate for innings — a scenario few would’ve anticipated after an offseason in which the Friars acquired Yu Darvish, Blake Snell and Joe Musgrove to strengthen a rotation that already looked to have a fair bit of depth. However, Darvish was placed on the injured list yesterday owing to back issues, and the Padres are also currently without Chris Paddack (oblique strain), Dinelson Lamet (forearm inflammation, hip surgery) and Adrian Morejon (Tommy John surgery). Touted prospect MacKenzie Gore hasn’t pitched in a game since June 13, as he was sent back to the team’s Spring Training complex to work on mechanical issues not long after.

Arrieta will give the Padres a veteran option to soak up some innings, but the extent of his struggles with the Cubs underscore the dire nature of the need for arms in San Diego at the moment. While Arrieta got out to a nice start after signing a one-year, $6.5MM deal to return to the Cubs, his production cratered after a handful of solid outings to begin the season.

Arrieta pitched to a 2.57 ERA through his first five starts but has since been shellacked for 58 runs in 58 1/3 innings. He completed six innings just one time in those 15 outings and completed five frames in just six of them. And while a few poor outings can always skew a few months’ worth of numbers, that isn’t necessarily the case here; Arrieta allowed at least four runs in 10 of those 15 starts. This year’s 90.8 mph average fastball is the lowest of his career and represents a two mile-per-hour drop from last year’s levels.

Of course, Arrieta was once one of the game’s best arms. He followed up a strong first half in 2015 with a historically dominant second half, cruising to a National League Cy Young Award and a sixth-place finish in NL MVP voting. He went on to throw a shutout in his postseason debut in 2015. That was followed by All-Star campaign in 2016, which featured 197 1/3 innings of 3.10 ERA ball, and Arrieta posted a 3.63 ERA in 22 1/3 postseason frames as the Cubs marched to a World Series victory. Broadly speaking, he was one of the primary drivers behind the Cubs’ transformation into a perennial contender during his initial run there.

That all feels like a distant memory after three lackluster years in Philadelphia, an elbow surgery, and this year’s unsuccessful Wrigley reunion. The Padres will hope a change of scenery can lead to some late-season lightning in a bottle, but the mounting number of rotation injuries has left their grip on the second NL Wild Card spot feeling more tenuous than ever. What was a six-game lead over the Reds as recently as July 27 has been whittled away to a 2.5-game lead over their closest competitors in Cincinnati.

Ken Rosenthal of the Athletic first reported the sides were close to a deal. Bob Nightengale of USA Today was first to report the Padres were among the teams with interest in Arrieta. Jon Heyman of MLB Network reported the sides had an agreement and that Arrieta would get the start on Wednesday. Image courtesy of USA Today Sports.