The Angels announced they’ve signed reliever Aaron Loup to a two-year, $17MM guarantee. (The team announced the contract terms). He’ll receive successive $7.5MM salaries in 2022 and 2023, and the deal also contains a $7.5MM club option for 2024 that comes with a $2MM buyout. Loup is a client of the Beverley Hills Sports Council. 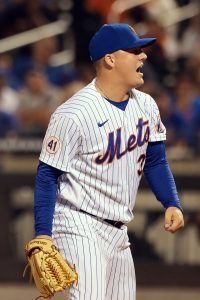 A longtime member of the Blue Jays’ bullpen early in his career, Loup had seemingly settled in as a competent journeyman not too long ago. He split the 2018 season between Toronto and the Phillies, then spent the next three years playing on either minor league or one-year big league deals with different clubs.

After an injury-wrecked 2019 campaign with the Padres, he settled for a minors pact with the Rays in 2020. Loup posted strong results in Tampa Bay but didn’t boast the kind of velocity teams typically covet from back-end arms. His 2020 numbers were enough to land him a guaranteed job with the Mets, albeit on a fairly low $3MM base salary.

Loup’s deal with the Angels shatters his previous three contracts, a testament to how effective he was in Queens. The Louisiana native worked to an incredible 0.95 ERA across 56 2/3 innings, a mark bested only by Seattle’s Casey Sadler among those with 30+ frames. Teams are looking far beyond ERA to evaluate pitchers (particularly relievers), but Loup’s underlying metrics also painted the picture of an elite late-innings arm.

The 33-year-old (34 next month) fanned a solid 26.1% of batters faced, the best full season mark of his career. That’s more good than dominant, but Loup has never been a particularly overpowering hurler. Relying primarily on a 92 MPH sinker and a mid-80s cutter/slider, the southpaw has typically been a ground-ball specialist. Loup routinely induces grounders on half or more of balls in play against him, and he continued to thrive in that regard this year. He also boasts plus control, only walking more batters than average in two of his eight career seasons with at least 20 innings pitched. His 7.3% walk percentage in 2021 was almost three points lower than the 9.8% league mark for bullpen arms.

Loup’s standout skill, however, has been contact suppression. He’s typically one of the league’s harder pitchers to square up, and that was never more true than in 2021. Only six of the 218 hitters who stepped in against him recorded an extra-base hit, and he remarkably allowed just a single home run. The Angels can’t reasonably count on Loup to be that effective moving forward, but the front office is clearly banking on him inducing plenty of grounders and otherwise unthreatening contact.

Adding to Loup’s appeal is that he stymied hitters from both sides of the plate. He’s always been a tough at-bat for left-handed hitters, and he was leveraged situationally quite a bit early in his career. But Loup has proven adept at getting righties out lately as well, holding them to a meager .205/.276/.311 line since the start of 2020. An ability to handle hitters from both sides of the plate has taken on an outsized importance in the three-batter minimum era, and Loup has proven capable of taking on that expanded role.

Loup was perhaps the top option in this offseason’s left-handed relief group. Andrew Chafin, Brooks Raley and former Angel Tony Watson now stand out as the best remaining arms in a fairly thin class. The combination of market scarcity and Loup’s recent dominance leads to a very solid contract that comes in a bit higher than generally expected.

The signing pushes the Angels’ estimated 2022 player commitments a bit north of $157MM, in the estimation of Jason Martinez of Roster Resource. Non-tenders could shave a couple million dollars off that tally, and there’s still some decent leeway before reaching the club’s near-$182MM season-opening 2021 payroll. That could give general manager Perry Minasian and his staff the chance for further upgrades, with the pitching staff and middle infield still standing out as potential target areas.

The Angels have already made one big rotation strike, signing Loup’s 2021 (and now 2022) teammate Noah Syndergaard to a $21MM deal. Even after the Syndergaard pickup, Minasian told reporters the club was hoping to further bolster the rotation (link via Rhett Bollinger of MLB.com). And while Loup should be a notable upgrade in the late innings, the club had a below-average relief corps in 2021 and is facing the potential free agent departure of closer Raisel Iglesias. An effort to retain or replace Iglesias still seems plausible, even with Loup now in the fold.

To create space on the 40-man roster, Los Angeles designated southpaw Hector Yan for assignment. The 22-year-old was highly regarded enough that the club added him to the 40-man last winter to keep him from potential selection in the Rule 5 draft. Yan struggled to a 5.25 ERA with a sky high 15.2% walk rate at High-A Tri-City, though, costing him his roster spot. The Angels will have ten days to trade Yan or place him on waivers.