The Tigers have landed their new franchise shortstop. Detroit announced on Wednesday they’ve signed Javier Baez to a six-year contract. According to reports, it’s a $140MM guarantee for the Wasserman client, who also lands some other perks in the deal. Baez can opt out after the 2023 campaign and has limited no-trade protection that allows him to block a move to 10 teams each year.

Baez’s salaries break down as follows: $20MM in 2022, $22MM in 2023, $25MM each in 2024-25 and $24MM each in 2026-27. He also receives assorted incentives based upon finishes in MVP and other awards’ voting. Baez is guaranteed $42MM over the first two seasons of the slightly backloaded deal. That means he’ll have four years and $98MM in remaining guarantees after the 2023 campaign, when he’ll need to decide on his opt-out possibility. 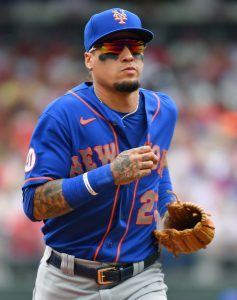 Shortstop has been a glaring need for the Tigers since the onset of free agency, with general manager Al Avila plainly stating his intentions to improve at the position not long after the season’s conclusion. While many speculated that Carlos Correa, who knows Detroit skipper AJ Hinch quite well from the pair’s time in Houston, would be the likeliest candidate to step into that role, Avila & Co. have preached a more measured approach since the offseason commenced. The Tigers already inked lefty Eduardo Rodriguez to a five-year, $77MM contract early in free agency, and adding Baez to the fold would effectively satisfy multiple needs at what figures to be a fair bit less than the cost of Correa on his own.

Detroit shortstops were quite nearly the worst in Major League Baseball from an offensive standpoint in 2021, hitting a combined .201/.275/.321. The resulting 62 wRC+ (i.e. 38 percent worse than league-average production) was the second-lowest mark in the sport, leading only a tanking Pirates club in overall offensive output at the position.

The Tigers have already moved on from their leader in shortstop innings over the past few seasons, bidding adieu to Niko Goodrum after passing him through waivers unclaimed and watching him elect free agency. Baez would represent an across-the-board improvement over Goodrum, providing lights-out, frequently highlight-reel defense in addition to considerable power and baserunning skills for his position.

The 2020 campaign was a season to forget for Baez, but the end result of a roller-coaster 2021 season was a .265/.319/.494 batting line with 31 homers and 18 steals (in 23 tries) for the two-time All-Star and 2018 NL MVP runner-up. Generally speaking, Baez (who’ll turn 29 tomorrow) is a power-hitting but free-swinging shortstop whose penchant for putting the ball over the fence is at least somewhat mitigated by an anemic walk rate that typically lands him near the bottom of the league in on-base percentage. This year’s .319 OBP was actually the second-highest single-season career mark for Baez, who has drawn a free pass in just 4.8% of his 3255 MLB plate appearances.

That said, it’s worth pointing out that there were some positive strides shown by Baez following a trade from the Cubs to the Mets at the July 30 deadline. After whiffing in a whopping 36.3% of his plate appearances in Chicago, Baez cut that figure to a more tolerable (albeit still too lofty) 28.5% in Queens. He also walked at a 7% clip with the Mets — a mark that’s a good bit shy of the 8.8% league average but also well north of 4.7% mark he carried throughout his years with the Cubs. After a rocky run with the Cubs in 2021, Baez finished the season on a heater and posted a composite .299/.371/.515 batting line as a Met.

Since Opening Day 2018, Baez ranks third among all Major League players with 52 Outs Above Average, per Statcast, and his 44 Defensive Runs Saved place him ninth among 4053 defenders who’ve taken the field. While the now-former incumbent Goodrum was a solid defender in hiss own right, Baez is a game-changer with the glove who’ll serve as a pronounced improvement to the Detroit defense.

The Mets were reportedly interested in retaining Baez, who is close friends with New York shortstop Francisco Lindor, but it now seems he’ll instead head to the Motor City and serve as one of the faces of a team looking to emerge from a rebuilding cocoon and announce its return to contention in the American League Central.

Detroit has spent most of the past five years in a prolonged rebuilding effort but has managed to stockpile an enviable farm system that now leaves the team on the precipice of turning the corner. Young starters Casey Mize, Tarik Skubal and Matt Manning will be expected to team with Rodriguez in leading the starting staff, while 2020 No. 1 overall pick Spencer Torkelson and 2019 No. 5 overall pick Riley Greene are both viewed as top-10 leaguewide prospects and potential lineup anchors.

That blossoming young core makes it easy for Detroit, a team that has previously trotted out Opening Day payrolls north of $200MM, to spend heavily in free agency this winter. Miguel Cabrera is signed through the 2023 season, but the only player on the books beyond that point is the aforementioned Rodriguez. Roster Resource’s Jason Martinez projects a $104MM payroll without Baez next season, and that’s before the likely non-tender of Matthew Boyd and his $7.3MM projected salary (courtesy of MLBTR contributor Matt Swartz).

With that in mind, even if this is the last marquee move of the offseason for the Tigers — and, to be clear, there’s no indication that’s the case — the additions of Baez and Rodriguez clearly set the stage for a return to aggressive adding in Detroit. The Tigers will have one more high-end draft pick in 2022, but the goal for the team is clearly to shift into win-now mode, and the additions of both Baez and Rodriguez are notable steps in that direction. Baez has averaged a hefty 4.6 wins above replacement (per Baseball-Reference) per season over the past four years, even including that ugly 2020 campaign, and the Tigers will count on him for more of the same as a linchpin both in the lineup and on defense as they turn the page from a rebuild the fans are all too ready to leave in the rear-view mirror.