The Cubs continue to show that their current retooling efforts won’t at all resemble the aggressive teardown of a decade ago, announcing on Friday that they’ve signed star NPB outfielder Seiya Suzuki to a five-year contract. Suzuki, a Wasserman client, will reportedly be guaranteed a hearty $85MM on the contract.

Under the NPB/MLB posting system, that means the Cubs will also owe Suzuki’s former team, the Hiroshima Carp, a posting fee of $14.625MM. That brings the total investment in Suzuki to $99.625MM — although only Suzuki’s actual contract (more specifically, its $17MM annual value) will count against the luxury tax. Suzuki will reportedly receive a $5MM signing bonus and be paid annual salaries of $7MM, $17MM, $20MM, $18MM and $18MM on the deal, which contains a full no-trade clause. 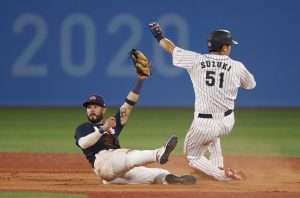 According to MLBTR’s Steve Adams, “The most bullish opinions we’ve gotten peg Suzuki as an everyday Major League right fielder — a solid defensive player with a strong arm and enough power to hit in the middle of a big league lineup.”  In August, Dylan Hernandez of the L.A. Times spoke to a Major League scout who compared Suzuki to AJ Pollock, back when Pollock was playing for the Diamondbacks.

Though Suzuki has nine seasons under his belt, he’s still just 27 years old, which is rare for a posted player out of Japan.  Suzuki explained to Hernandez, “I think everyone feels they want to play at the highest stage if they can get the chance.”  Suzuki was only one year short of international free agency, so the Carp were motivated to be compensated for his departure.

In late November, the Carp posted Suzuki for MLB teams, beginning a 30-day window that was interrupted by the sport’s 99-day lockout.  Suzuki was left with 20 days post-lockout to negotiate a deal with an MLB team.  On top of his contract, the Cubs will owe the Carp a posting fee equal to 20% of the contract’s first $25MM, 17.5% of the next $25MM and 15% of any dollars thereafter.  Only Suzuki’s $17MM average annual value will count toward the competitive balance tax, but the Cubs are a good $78MM short of the $230MM base tax threshold including Suzuki.

Suzuki is a strong-armed prototypical right fielder and a five-time NPB Gold Glove winner.  The Cubs still have Jason Heyward under contract for another two years and $44MM, but given Heyward’s struggles at the plate, there’s a good chance Suzuki is taking over his position.  Suzuki may spend most of his five-year tenure playing alongside center fielder Brennen Davis, Baseball America’s 16th-ranked prospect.

The news of the Suzuki signing comes on the heels of Anthony Rizzo’s two-year, $32MM deal with the Yankees.  It’s a fitting contrast and representation of the Cubs’ reboot, as Suzuki is five years younger than Rizzo and the Cubs reportedly once offered Rizzo the same contract before trading him and other stalwarts in July last year.  Cubs fans will be watching many former stars in different uniforms this year, with Javy Baez having signed in Detroit, the Phillies reaching an agreement with Kyle Schwarber, and Kris Bryant signing with the Rockies.  The Cubs’ other big splash came before the lockout, the signing of starting pitcher Marcus Stroman to a three-year, $71MM deal.

Interest was widespread in Suzuki.  The Padres, Red Sox, Rangers, Giants, Mariners, Yankees, Blue Jays, Marlins, and Dodgers are among the other teams that were linked to the slugging right fielder.

Pitcher Masahiro Tanaka holds the record for a Japanese player signing in MLB, having landed a seven-year, $155MM deal with the Yankees in January 2014.  On the position player side, Suzuki eclipses the four-year, $48MM deal outfielder Kosuke Fukudome signed with the Cubs in December 2007.  The only position players to have sustained success in MLB out of Japan have been Ichiro Suzuki, Hideki Matsui, and of course, pitcher/designated hitter Shohei Ohtani.

Sankei Sports first reported the agreement. Ken Rosenthal of The Athletic reported the terms and the no-trade clause, while MLB.com’s Mark Feinsand provided the annual breakdown.