The Dodgers continue to add to their roster, announcing this evening they’ve agreed to terms with Tyler Anderson on a one-year deal. It’s reportedly an $8MM guarantee that also contains an additional $500K in incentives if he exceeds 100 innings next season.

Anderson was one of the better remaining options in a free agent rotation market that has been mostly picked through. The southpaw is coming off a decent season split between the Pirates and Mariners, in which he combined for a 4.53 ERA over 167 innings. Anderson only averaged a bit more than five innings per start, but he took the ball 31 times and was generally successful with regards to keeping his team in games. He allowed three or fewer earned runs in all but five of his outings. 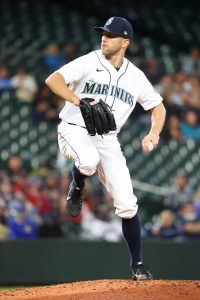 Signed by Pittsburgh to a $2.5MM guarantee last offseason, he settled in as perhaps the most reliable member of the Bucs’ starting staff. Over 18 outings, Anderson worked 103 1/3 frames with a 4.35 ERA. He was an obvious trade candidate as an impending free agent on a rebuilding team. After a reported agreement with the Phillies fell through due to concerns about the medical evaluation of one of the prospects involved, the Pirates pivoted and flipped him to Seattle for prospects Carter Bins and Joaquin Tejada at the deadline. Anderson spent the final couple months with the M’s, performing alright until a nine-run blow-up against the Angels tanked his overall numbers.

Anderson isn’t the most overpowering arm on the market. His fastball averaged 90.6 MPH last season, and he struck out a below-average 19.1% of opposing hitters. Yet he was adept at getting opponents to chase pitches outside the strike zone, and his mediocre strikeout percentage belied a solid 11.5% swinging strike rate. That’s partially because batters swung so often against him — among pitchers with 100+ innings, only Michael Wacha had a higher opponents’ swing rate — but Anderson nevertheless generated more whiffs per swing inside the strike zone than the average starter.

In addition to getting opponents to frequently chase, Anderson threw pitches in the zone at a higher-than-average rate. Those contributed to keep his walks down, as he doled out free passes at just a 5.4% clip. He’s been a low-walk arm throughout his career, and he’s posted an ERA between 4.37 and 4.55 in each of his last three seasons (excluding a 2019 campaign in which he was limited to five starts by left knee issues). A fly-ball pitcher, Anderson has been prone to the home run ball throughout his career. He also generates his fair share of pop-ups, though, and he’s typically adept at avoiding hard contact.

Anderson has started all but four of his 117 MLB appearances. He’ll presumably join the back-of-the-rotation mix in Los Angeles, joining offseason signee Andrew Heaney, David Price and Tony Gonsolin among the options for Dave Roberts. Walker Buehler, Julio Urías and Clayton Kershaw will be the top three options from the outset of the season. Trevor Bauer remains on the roster, but his paid administrative leave was recently extended through April 16.

The $8MM guarantee only adds to an ever-mounting payroll in Los Angeles. The Dodgers now have an estimated $282MM in actual payroll, according to Jason Martinez of Roster Resource. Their luxury tax ledger is up to $284MM, just $6MM shy of the highest tier of penalization.

Robert Murray of FanSided first reported the Dodgers and Anderson had agreed to a deal. Fabian Ardaya of the Athletic reported it was a one-year pact. Jeff Passan of ESPN reported the $8MM guarantee, while Jon Heyman of the MLB Network was first with the incentives.