A former Cy Young winner is stepping away from the game. In an appearance on Barstool’s Pardon My Take podcast, Jake Arrieta announced he is set to retire (interview around 56:00 mark). “I haven’t signed the papers, man, but I’m done,” Arrieta said.”It’s time for me to step away from the game. At some point, the uniform goes to somebody else. It’s just my time, really. … Yeah, man, I’m done.”

Arrieta, now 36 years old, retires after a 12-season MLB career. A fifth-round pick of the Orioles out of TCU in 2007, he made it to the majors midway through the 2010 campaign. He spent three-plus seasons in Baltimore, never really clicking despite getting a few opportunities to crack the starting rotation. Arrieta made 69 appearances in black and orange, pitching to a cumulative 5.46 ERA/4.72 FIP. His strikeout and walk numbers improved later in his time with the O’s, but the results never lined up and Baltimore traded him to the Cubs in early July 2013.

That deal — which saw Arrieta and reliever Pedro Strop head to the North Siders for starter Scott Feldman and backup catcher Steve Clevenger — proved one of the most consequential trades in recent MLB history. Arrieta had decent results down the stretch with the Cubs, but his peripherals didn’t suggest he was on the verge of a breakout. 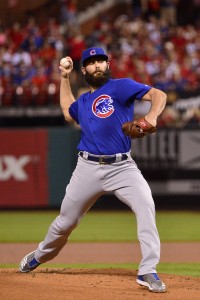 That’s exactly what transpired, though. By 2014, Arrieta had emerged as a top-of-the-rotation starter. He tossed 156 2/3 innings of 2.53 ERA ball, earning a ninth-place finish in NL Cy Young balloting. That was an unexpected age-28 breakout, but rather than showing any signs of regression, Arrieta took his game to another height the next season. In 2015, the right-hander tossed a personal-high 229 innings with an incredible 1.77 ERA. He led MLB with four complete games and three shutouts, allowing a league-low 5.9 hits per nine frames.

Arrieta had a very strong first half that year, posting a 2.66 ERA in 121 2/3 innings. Yet it’s the second half of that 2015 season for which he might best be remembered, as he orchestrated one of the most overpowering runs by any pitcher in MLB history. After that year’s All-Star break, Arrieta threw 107 1/3 frames and allowed just nine earned runs (0.75 ERA). Opposing hitters posted a laughable .148/.204/.205 line in just shy of 400 plate appearances during that stretch, as the Cubs won 97 games and earned a postseason berth.

During that year’s Wild Card game, Arrieta continued his run of absolute dominance, tossing an 11-strikeout shutout in that season’s Wild Card game against the Pirates. He wasn’t as excellent during starts in the NLDS or NLCS, but he had launched himself into the upper echelon of starting pitchers. Arrieta won that season’s Cy Young award, and he’d pick up a third consecutive top ten finish the following season.

In 2016, Arrieta worked to a 3.10 ERA in 197 1/3 frames. He again allowed a league-low 6.3 hits per nine, picking up his first All-Star selection in the process. Alongside Jon Lester and a career-best season from Kyle Hendricks, Arrieta played a key role in the Cubs team that snapped their 108-year title drought. Chicago won both of his starts during the seven-game triumph over the Indians, during which he tossed 11 1/3 innings of three-run ball.

Arrieta remained in Chicago for one more season. He never recaptured his otherworldly 2014-15 form, but he still offered mid-rotation production with a 3.53 ERA in 168 1/3 innings. That offseason, he signed a three-year, $75MM guarantee with the Phillies. Arrieta’s first season in Philadelphia was solid, as he allowed just fewer than four earned runs per nine in 31 starts.

The past three seasons proved a struggle, as Arrieta’s velocity had begun trending downwards from its mid-90s peak by 2017. He posted a 4.64 ERA or higher in each of his final trio of campaigns, including a 7.39 mark in 24 starts between the Cubs and Padres last season. Arrieta returned to the place where he’d had the most success last winter, but the Cubs released him in August. He struggled in four starts with the Friars, and San Diego let him go shortly before the regular season wrapped up.

Obviously, Arrieta’s career didn’t end the way he would’ve liked. Yet there’s no question he reached a height few players in the game’s recent history have hit. From 2014-16, only future Hall of Famer Clayton Kershaw bested Arrieta’s 2.42 ERA among qualified starters. He played a pivotal role on the most successful teams in the past century of Cubs baseball and leaves the game with a Cy Young and a World Series title. Over his 12-year run, he won 115 games, and struck out upwards of 1400 batters in 1612 1/3 innings.

Arrieta retires with a career 3.98 ERA, although that mark is inflated by the struggles he experienced at each end. For a three-to-four year period, he was among the top few pitchers on the planet. MLBTR congratulates him on his excellent run and wishes him the best in retirement.