TODAY: The Nationals aren’t planning to increase their offer beyond $440MM, The Washington Post’s Jesse Dougherty writes.  Soto is reportedly looking for a deal that is at least a decade long, gives him the most guaranteed money in baseball history, and gives him an AAV at least close to the highest average annual values.  In a Twitter thread, Dougherty suggests that the Nats could come closer to Soto’s demands by offering $440MM over 12 or 13 years rather than 15, though that scenario might not be palatable to the Nationals for luxury tax reasons.

JULY 16, 3:04PM: While the Nationals’ offer didn’t have any deferred money, the $440MM was “heavily backloaded” into the offer’s last six seasons, USA Today’s Bob Nightengale reports.  The offer’s backloaded nature played a part in Soto’s decision, according to Jon Heyman of The New York Post, and other factors included the relatively low AAV and the uncertainty surrounding the Nats’ ownership situation.

11:21AM: In a somewhat shocking development, the Washington Nationals will now listen to trade offers for transcendent superstar Juan Soto, per the Athletic’s Ken Rosenthal. Soto reportedly rejected a $440MM extension offer, prompting the change of heart on the Nationals’ part.

The Nationals have long held the position that they would not be open to trading Soto, their 23-year-old superstar, who is already firmly listed among the best hitters in baseball. The Nationals have some time to make a decision, as Soto is under team control for another two seasons beyond this one. As of right now, however, the team is among the worst in baseball, and their farm system continues to be understocked.

All that said, the Nats have made consistent efforts to come to a contract extension with Soto’s agent Scott Boras, with no success. According to Rosenthal, the latest such offer – the third offer from the Nationals’ side – was for 15 years and a total of $440MM. Perhaps more shocking than the number itself is that the Nats did not include any deferred money in the deal. The Nationals are well known for deferring money in most of their long-term deals. That they were willing to avoid that practice shows some bend on the Nats’ part, but it was not enough to consummate a deal. 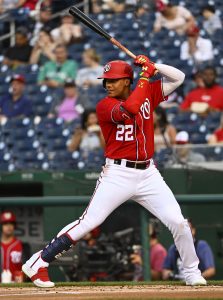 If those numbers are correct, the Nats’ offer would have given Soto an AAV of $29.33MM over that 15-year span, which falls a little shy of some of the game’s top contracts. While that’s nothing to scoff at, it would not be a record-setting number. The total dollar amount would, however, top MLB’s largest contracts.

The deal would have carried Soto through to his 38th birthday, effectively locking him in as a National for the entirety of his career. It’s certainly a large chunk of money to offer, but Soto might not be so ready to put a cap on his career earnings – even such a lofty one. Soto is currently making $17.1MM this season, with another two arbitration raises yet to come in his final two seasons. If he stays healthy, he’ll easily make more than $29.33MM AAV by his final season before free agency.

With their latest offer rejected, the Nats will now spend the next couple of weeks listening to trade offers for Soto ahead of the August 2nd trade deadline. Certainly, given the team control remaining, the Nationals would have to be floored by an offer in order to move him. The likelihood of a deal at this juncture still feels slim. An offseason deal is more likely. Still, interested parties now have a couple of weeks to begin making headway.

It’s difficult to fathom what exactly it would take to pry Soto loose from the Nationals. No matter what the return package, it’s sure to seem light in the eyes of local fans. Soto is the lone superstar and fan attraction at this point. The club has seen the departure of organizational mainstays like Max Scherzer, Trea Turner, and Ryan Zimmerman in the past calendar year alone. Without Soto, the club would be starting from scratch, especially given the state of the farm system. A player of Soto’s stature does not come along frequently, and it’s unlikely they could recoup anywhere close to equal value for Soto.

For the Nationals to deal him, they have to really believe they have no chance of signing him to a long-term contract extension. Perhaps this latest rejection makes that point for them. From the outside, there are certainly ways in which the Nats could improve their offer, namely with a larger AAV, which does seem to be something that matters to players. They have, as is often pointed out, crossed this bridge with Boras before, both in signing Stephen Strasburg to a long-term deal, and in not coming to terms with players like Bryce Harper and Anthony Rendon.

Complicating matters on both sides is the uncertain future of the Nats’ ownership situation. If the Lerners do, in fact, plan on selling the club, keeping Soto on the roster would seem to be positive, almost necessary. A new ownership group would likely rather have Soto than whatever handful of prospects would come back in a deal. And yet, Soto might be disinclined to commit to a new ownership group. How much can the team be sold for if part of the deal necessitates giving Soto more than $440MM? And yet, the franchise has to be far less attractive to potential buyers without Soto as a marketing centerpiece. How intent the Lerners are in selling the Nats might be the crux of this entire situation.

In many ways, it’s reasonable to expect an end to this saga – one way or the other – by the beginning of next season. Unlike a situation like, say, the Cubs had with Kris Bryant, the Nats have no hope of contending at this present moment, which might make them less inclined to suffer the constant trade rumors. When the Cubs held onto Bryant through years of rumors, they were, at least, competitive year-by-year, giving them cause to hold onto Bryant, even if it meant seeing him walk as a free agent. For the Nationals, Soto’s future is the only story in DC until it gets resolved.

For now, it’s going to be a tense couple of weeks for Nats’ fans as they await the trade deadline. Even if Soto stays beyond August 2nd, the trade rumors are going to continue to swirl. The Nationals have to be wondering if Soto’s uncertain future is a tenable situation. If they can’t find the right deal, however, they need to be willing to wait.