The Nationals are calling up top pitching prospect Cade Cavalli for his Major League debut on Friday, per a club announcement. Grant Paulsen of 106.7 FM The Fan first reported Cavalli would be getting the call to the big leagues. The 2020 first-rounder will need to have his contract formally selected to the Major League roster before Friday’s game. 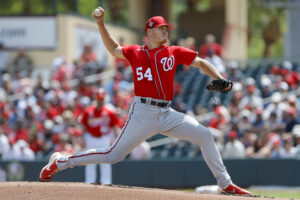 The 6’4″, 240-pound Cavalli, in addition to his lofty draft status, currently ranks as one of the sport’s top pitching prospects. He checks in at No. 20 on FanGraphs’ most recent prospect rankings and is also featured prominently on the latest leaguewide lists from Baseball Prospectus (No. 29), Baseball America (No. 52) and MLB.com (No. 58).

Cavalli made the Futures Game roster in each of the past two seasons, though he was a late scratch from this year’s game due to a blister issue on his pitching hand. Fans who tuned into the 2021 game saw Cavalli touch 102 mph on the radar gun with a powerful heater that generally draws 70 grades on the 20-80 scale. Command issues, stemming in part from a violent delivery that gives some scouts concerns he’ll ultimately move to the bullpen, have been the big knock on Cavalli. He also works with a slider, curveball and changeup, each drawing praise as anywhere from an above-average to potentially plus pitch. Eric Longenhagen of FanGraphs writes in his scouting report that while there’s relief risk, “…if things click, Cavalli is going to be a monster.”

For the Nats, the hope is that Cavalli can achieve that top-of-the-rotation ceiling and join left-hander MacKenzie Gore and righty Josiah Gray as the nucleus of the team’s rotation for years to come. Because he’s being called up this late in the season, Cavalli can’t earn a full year of Major League service time and is also well past the point at which Super Two status is attainable. That means he’ll be controllable for six more seasons beyond this one — all the way through 2028 — and won’t be eligible to reach arbitration until after 2025 season. Of course, future demotions back to the minors could push back either of those trajectories.