The Twins’ surprise signing of Carlos Correa to a three-year, $105.3MM contract was supposed to be the signature free-agent addition that washed away the lingering distaste of an awful 2021 campaign pushed them toward an AL Central crown. Instead, the Twins have wildly unperformed expectations for a second straight season, due in large part a once-again disastrous level of injury. Minnesota has had more IL days accrued than any team in the American League and trails only Cincinnati for the MLB lead in that odious category. (The Athletic’s Aaron Gleeman took a player-by-player look at the Twins’ staggering injury woes just this morning.)

Very little has gone right in Minnesota this year, but with all the woes they’ve incurred in their catastrophic second half, Correa’s monstrous finish to the season has flown somewhat under the radar. As the team has crumbled around him, Correa has enjoyed just the type of sprint to the finish line the team had hoped for at the time of the contract.

Correa struggled in April and in July, sandwiching a paid of outstanding months between two below-average months at the plate. His bat picked up in late July, however, and he’s finishing out what could well be his only season with his strongest production of the year. Since Aug. 1, Correa is hitting .323/.405/.505 with eight homers, nine doubles and a triple in 222 plate appearances. Both his walk rate (11.7%) and strikeout rate (19.4%) during that stretch of 222 plate appearances are about two percentage points better than the levels Correa carried through the end of July. 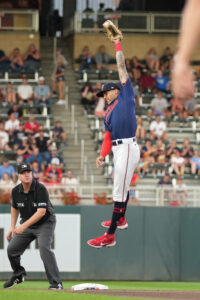 Since Aug. 1, Correa ranks 10th in the Majors in batting average, ninth in on-base percentage and 25th in slugging percentage. His 162 wRC+ (indicating he’s been 62% better than the league-average hitter) in that time is tied with J.T. Realmuto for 13th in all of baseball. If you really want to cherry-pick, Correa’s ridiculous .386/.432/.670 slash over 95 plate appearances since Sept. 4 give him the fifth-best wRC+ in baseball during that time (216).

There’s no denying that Correa’s counting stats will be down from their 2021 levels when the season draws to a close. It’s at least possible that he swats another five homers and ends up tying last year’s mark off 26 long balls, though with nine games to play, it’s also unlikely. He’s not going to drive in as many runs as he did in ’21, and some of that is due to a curious power outage with runners in scoring position this season. It’s also due, however, to the simple fact that with Houston in 2021, Correa came to the plate 187 times with runners in scoring position and 304 times with men on base. This season, those numbers are currently at 116 and 248. He hasn’t been as good in big spots as he was a year ago, but also simply hasn’t had as many big spots, thanks to a Twins lineup that has routinely relied on minor league placeholders to fill in for injured regulars.

The biggest change in Correa’s valuations this season has been on the defensive side of things. His defensive ratings are down across the board, although Defensive Runs Saved and Ultimate Zone Rating still peg him as a clearly above-average shortstop — just not the all-world, best-in-MLB-regardless-of-position defender he was in 2021. Statcast feels differently, dinging Correa at four outs below average — his first negative OAA mark since 2016.

Having just celebrated his 28th birthday last week, it seems unlikely Correa’s defensive skills have simply eroded. Repeating last year’s career-best 20 Defensive Runs Saved and massive 12 Outs Above Average was always going to be a challenge; defensive stats often oscillate just like their offensive counterparts, and the likely bet is that he’ll again be above-average across the board in 2023. He’s only made eight errors this season, six of which have been of the throwing variety. That only tells the tales of the balls Correa has gotten to, of course — hence the pitfalls of raw fielding percentage — but it does illustrate that Correa hasn’t become a clumsy-handed butcher who’s booting the routine plays.

Overall, Correa has been worth 5.0 wins above replacement, per Baseball-Reference, and 4.2 WAR per FanGraphs. His .289/.365/.468 batting line is 40% better than league-average after adjusting for league and home park, by measure of wRC+, and he’s been lauded throughout the season by teammates, coaches and the front office staff alike for his influence leadership and influence in the clubhouse. It’s not necessarily the best-case outcome the Twins might’ve hoped for when signing him, but a strong four-to-five win season and positive off-the-field impact is a strong outcome all the same.

Correa has said at multiple times this season that he and his family feel at home in Minnesota and that he’s open to, if not hopeful for a long-term offer to stay with the Twins long term. That, of course, is a sensible thing for any pending free agent to say, and the fact that he’s open to a long-term deal (presumably at top-of-the-market dollars) shouldn’t be a surprise. It’s moderately notable that he’s chosen to publicly state his hope for a long-term arrangement rather than demur and say that contract talk is for the offseason, but public comments from Correa — as with most pending free agents — can be taken with a grain of salt.

The reality is that while Correa might never find the ten-year deal and $35MM-ish annual value he was likely seeking last offseason, he can absolutely find a long-term pact that will trounce the remaining two years and $70.2MM on his current contract with the Twins. Correa can very realistically command more than $30MM per year over a long term — likely with additional opt-out opportunities baked into the deal. Because of his age, even a ten-year deal would still only run through his age-37 season. Opting out has long seemed to be the likeliest outcome for Correa, as noted on last month’s update to MLBTR’s Free Agent Power Rankings (where Correa placed fourth).

Correa’s torrid production has only improved his stock since that time. The Phillies, Cubs and Giants are reported to be among the teams that will look at free-agent shortstops. The Twins have already expressed public interest in extending the relationship. The Braves, Red Sox and Dodgers will all have their own star shortstops reach the market, creating potential openings for all three (in-house options notwithstanding). The Cardinals and Angels could need shortstops. The Orioles could theoretically be lurking and have already signaled that their payroll will increase.

The free-agent market for shortstops should be strong, and Correa’s standing among the 15 most-productive hitters in the sport over the final two months of the season has likely silenced any inkling of a doubt regarding his opt-out clause. The Twins shocked baseball in March when they signed Correa in the first place. It would register as an even bigger shock if Correa now forgoes his opportunity to return to the market on the heels of a season — and a finish — this strong.