The Rangers’ shift from a rebuilding mindset into a win-now mode began in the offseason with a combined $556MM spent on Corey Seager, Marcus Semien and Jon Gray. It continued over the summer when Texas held onto several trade candidates of note (e.g. Martin Perez, Matt Moore) and overhauled their leadership; gone were manager Chris Woodward and longtime president of baseball operations Jon Daniels, leaving the team likely to conduct a managerial search this winter and leaving third-year GM Chris Young with full baseball operations autonomy.

Another aggressive winter seems likely, as the Rangers still have plenty of work to do on an improved but flawed roster. There’s been talk of a new contract with lefty Martin Perez, following his breakout in a return to his Rangers roots, but that’d only be one piece of the puzzle. There’s hope that Josh Jung will solidify third base, but there are questions behind the plate, in the outfield and on the pitching staff. 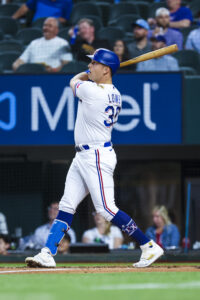 Texas has currently dropped nine games in a row, erasing any delusions that perhaps this team may be turning the corner right now, but that doesn’t mean there aren’t bright spots to the season. Seager has hit well. Semien has shaken off a disastrous start and, since mid-May, looked quite strong. Gray has lived up to his own multi-year deal. Perhaps the brightest spot of all, however, has come in the form of a breakout for slugger Nathaniel Lowe.

Acquired in a Dec. 2020 trade that sent three minor leaguers to the Rays, the now-27-year-old Lowe had a solid but uneven first year in Texas. He homered six times in his first 22 games (98 plate appearances) as a Ranger before settling in at a more modest, but still productive pace. Lowe continued hitting well but “only” chipped in another 12 home runs over his next 544 plate appearances. He finished the year as a .264/.357/.415 hitter — 14% better than league average, by measure of wRC+.

This is probably the best stretch of Lowe’s big league career, but he’s been quietly productive from the day he got to the big leagues in 2019 and increasingly looks the part of a bona fide middle-of-the-order hitter. Skeptics will point to this year’s .358 average on balls in play and wonder when he might regress, but it’s not a given, or even likely, that he will. Lowe touts a .346 BABIP in 1417 career plate appearances, suggesting that he’s capable of sustaining a mark well north of the league average (.291 this season).

Unlike many players who keep their BABIP figures high, Lowe isn’t beating close grounders and getting there via his wheels; rather, he does so by effectively spitting on any shifts against him. Lowe leads the Majors in opposite-field hits dating back to 2021, and he’s tied with Giancarlo Stanton for the game’s third-base wRC+ mark when hitting to the ball the opposite way during that time (only Tim Anderson and Aaron Judge have been better).

Lowe has only been shifted in 20.1% of his plate appearances this season, which isn’t among the very lowest rates in the league but is well below the league average. Moreover, the only lefties who rank below him (min. 250 plate appearances) are Raimel Tapia, Nicky Lopez, Luis Arraez, Steven Kwan, Luis Guillorme, Luis Gonzalez, Joey Wendle, Michael Harris II, Adam Frazier, Eric Hosmer, Riley Greene, Brandon Nimmo, Brendan Donovan and J.P. Crawford. There are some good hitters in that bunch (Kwan, Arraez, Nimmo and Harris in particular), but it’s mostly a list of contact-oriented hitters who don’t pose much of a power threat. With the exception of Harris, there’s no lefty-swinging slugger in MLB who is shifted less frequently than Lowe.

Similarly, Lowe isn’t fazed by left-handed pitching. His 141 wRC+ mark against lefties over the past two seasons is 26th among qualified hitters and trails only Matt Olson, Yordan Alvarez and Anthony Rizzo for the top mark among left-handed hitters in that time. Again, it’s tempting to say there’s just been some small-sample, BABIP-related luck in play, but in 2022 Lowe has punched out less against fellow lefties and hit for more power than against southpaws than when holding the platoon advantage. It’s not a simple case of some bloop singles falling in and inflating his stat line; he’s genuinely been a better hitter against lefties this year.

If there’s a knock on Lowe’s game, it has nothing to do with his work at the plate. His defense, however, is quite suspect by most public measures. Defensive Runs Saved (-7) and Statcast (11 outs and 8 runs below average) feel he’s been among the game’s worst defenders at his position (or at any position, for that matter). No player in the Majors has made more errors at first since the start of the 2021 season than Lowe’s 20. (Miguel Sano is close, in far fewer innings, but the point stands.)

Even if there’s a move to more designated hitter work in Lowe’s future, though, his bat should more than carry him at that position. He doesn’t draw many walks but has above-average contact skills, even when chasing pitches off the plate, and his ability to flip balls out to left field (or, in some instances, crush them into the left-field seats) should serve him well in that capacity even if he never pares back his higher-than-average chase rate.

Although Lowe has now played in parts of four Major League seasons, he’ll finish out the 2022 campaign shy of three years of Major League service time. At two years, 145 days he’ll be a lock for Super Two status and reach arbitration this winter, where his power numbers and durability will serve him well. That shouldn’t matter much for a Rangers club that spent more than a half billion dollars in free agency that winter, and finishing at two-plus years of service means Lowe will be controllable for another four seasons, through his age-30 campaign.

The Rays deservedly have a reputation for being a risky team with which to trade, and there’s plenty of time for any of Heriberto Hernandez, Osleivis Basabe or Alexander Ovalles to make the trade look more palatable from their vantage point. All three are having strong seasons, and Hernandez in particular is ranked anywhere from 23rd (Baseball America) to eighth (FanGraphs) among Tampa Bay farmhands. But as things stand right now, the Rangers have a middle-of-the-order complement to Semien and Seager for the next four years, and they’re not desperately missing any of the players they surrendered to acquire him.