The Angels announced that they have agreed to a one-year contract with Phil Nevin to manage the club in 2023. Nevin had taken over on an interim basis this year when Joe Maddon was fired but will stick around for another season in the dugout.

Nevin, 51, will get his first proper stint as a manager next year. After playing in 12 seasons from 1995 to 2006, he transitioned into coaching. He began in independent ball before getting some work in the minors. He got up to the major league level in 2017, joining the Giants as a third base coach before taking on the same job with the Yankees and then the Angels.

2022 got off to a roaring start for the Angels, with the club going 14-8 in April. For a moment, there was hope that the club could finally put it all together after years of not being able to capitalize on all the talent on their roster. However, the club slumped after that, eventually undergoing a 12-game losing streak across the end of May and early June, leading to Maddon getting fired as bench boss. 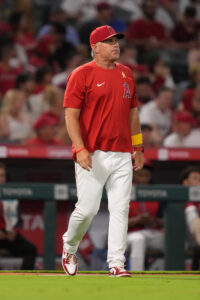 Nevin was promoted to interim manager at that point, losing his first two games to extend that losing streak to a 14-gamer. Overall, since the switch, the club has gone 46-59. Those aren’t exactly inspiring numbers, but it’s hard to know how much of that to pin on Nevin given the deficiencies of the roster.

Despite Nevin’s lack of experience and tepid results so far, there’s some logic to maintaining the continuity of the staff by keeping him around. There’s a great deal of uncertainty hovering over the club right now for a few reasons, one of which is that owner Arte Moreno is exploring selling the team. It’s possible that the club has a new owner in place or at least lined up by this time next year. At that time, they may have their own plans about how they want to run the club, whether they want to try to compete immediately or embark on a rebuild. Given that uncertain future, it makes sense to keep Nevin in there as a sort of placeholder until the future becomes clearer. The alternative would be conducting a lengthy search to find a new manager, but candidates might not be enthused about stepping into a situation that is still very much in flux.

There’s also the uncertainty around the on-field product. Despite having tremendously talented players like Mike Trout, Shohei Ohtani and Anthony Rendon on the roster, the team has continued to disappoint. They haven’t made the playoffs since 2014 and haven’t had a winning record since 2015. Ohtani is currently slated to reach free agency after the 2023 campaign, at which point Trout will be 32 and Rendon will be 33. It’s entirely possible that next season is the one that they finally put it all together, but it’s also possible that they disappoint yet again. The roster has obvious holes right now and it’s hard to guess how much Moreno would be interested in spending on a team he’s actively trying to sell.

There’s a wide variety of potential outcomes for the next year with a vast number of unknowns beyond that. The club will eventually have to decide what kind of manager they want, depending on which path they go down. However, today’s decision to keep Nevin around effectively kicks that can down the road for another year.