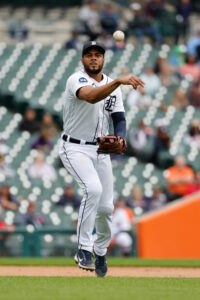 Candelario, 29, is a buy-low move for the Nationals that they surely hope will have some upside for them. The switch-hitter seemed to break out over 2020 and 2021 as he hit 23 home runs in that stretch and produced a batting line of .278/.356/.458. That production was 25% better than league average, as evidenced by his 125 wRC+. Advanced defensive metrics disagreed slightly on how to value his glovework, but it was generally viewed as in the vicinity of league average. FanGraphs valued him as being worth 1.9 wins above replacement in the shortened 2020 season and 3.9 in 2021. The combined 5.8 fWAR over those two seasons was good enough for him to rank third in all of baseball among third basemen, trailing only José Ramírez and Manny Machado.

Unfortunately, just about every member of the Tigers endured a nightmare season in 2022, and Candelario was not spared. He produced a batting line of just .217/.272/.361 for a wRC+ of 80. His batting average on balls in play, which was .342 over the previous two seasons, dropped to .257. That means luck could have played a factor but probably doesn’t explain everything, as his hard contract rate and average exit velocity both went in the wrong direction while he hit fewer line drives.

The Tigers could have retained Candelario for one more season via arbitration, with a $7MM salary projected by MLBTR contributor Matt Swartz. However, they ultimately decided they’d prefer not to put that kind of money down on the table to bet on a bounceback and opted to non-tender him instead.

Candelario has been a free agent for just over a week but has already found his next employer. The Nationals have been leaning hard into rebuild mode over the past few seasons, trading away players like Max Scherzer, Trea Turner and Juan Soto, just to name a few. That’s left them with a roster primarily consisting of unproven youngsters who are still looking to establish themselves at the big league level. There are many areas of the squad where it makes sense to supplement those players with fliers on veterans and third base is certainly one of them.

Not so long ago, it was thought that the Nats had their future third baseman in Carter Kieboom, who they selected 28th overall in 2016. He produced impressive batting lines as he moved up the minor league ladder and was ranked among the top 100 prospects in the sport by Baseball America in 2019 and 2020, getting as high as #15 in that latter season. Unfortunately, he didn’t immediately acclimate to the big leagues, hitting .197/.304/.285 for a wRC+ of 63 in 414 plate appearances over the 2019-2021 stretch. In March of 2022, he was diagnosed with a forearm strain and eventually underwent Tommy John surgery in May, leading to him missing the season entirely.

With Kieboom out this year, the Nats used various different players at the hot corner, one of which was veteran Ildemaro Vargas. The 31-year-old was selected to the roster in August and played well down the stretch, getting positive grades from all advanced defensive metrics and hitting .263/.299/.392 for a wRC+ of 92. The Nats were pleased enough to avoid arbitration with him, giving him a salary of $975K.

Vargas and now Candelario give the club some extra veteran insurance on the infield. If Kieboom surges ahead and grabs hold of the job, it shouldn’t be a problem. Vargas can play all over the diamond and Candelario has also spent time at first base in his career, meaning there would still be plenty of space for all of them in the lineup. With Luke Voit having been non-tendered, the first base/designated hitter mix is fairly wide open. Joey Meneses had an incredible breakout as a 30-year-old rookie in 2022 and will likely get a shot to see how much of that he can sustain going forward. But even if all of Kieboom, Candelario, Vargas and Meneses happen to be healthy and playing well at the same time, it should be possible to have two of them at the corners and one at designated hitter, with Vargas playing a super utility role, occasionally stepping in for that trio, as well as shortstop CJ Abrams and second baseman Luis Garcia.

The Nats have finished last in the National East in each of the past two seasons, winning 65 games in 2021 and just 55 in 2022. Their work in rebuilding their farm system is still in its early stages, meaning expectations will be low for 2023. Candelario has proven himself capable of being a valuable major leaguer, but is available due to his slump in 2022. If he is able to turns things around next year, he’ll give a boost to the team and turn himself into a valuable trade chip at the deadline, without really standing in the way of any of the club’s young players.