The Mariners and Brewers announced a trade sending second baseman Kolten Wong and cash considerations from Milwaukee to Seattle in exchange for outfielder Jesse Winker and infielder Abraham Toro. The Brewers are reportedly sending about $1.75MM to the Mariners, which effectively makes this a cash-neutral swap. 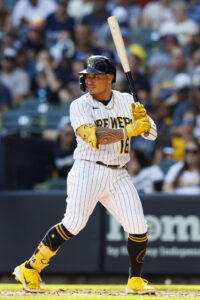 The 32-year-old Wong is owed a $10MM salary after the Brewers exercised a club option on him following the season. He’ll be a free agent next winter. Winker, meanwhile, is owed $8.25MM in 2023 after inking a two-year deal covering his final arbitration seasons last year. Like Wong, he’s ticketed for free agency next winter. Toro, on the other hand, is not yet arbitration-eligible and can be controlled for another four seasons.

Wong was a natural target for the Mariners, given their lack of an obvious starter at second base and their desire to add some balance to a lineup that skews a bit right-handed. He’ll give the M’s a steady presence, quite possibly atop the lineup, on the heels of the two best offensive seasons of his career. During his two years as a Brewer, Wong slashed a combined .262/.337/.439 with 29 home runs, 56 doubles, six triples and 29 steals.

With the Brewers, Wong seemingly made a concerted effort to begin elevating the ball with more frequency. His ground-ball rate, which had sat around 47% in St. Louis, dropped to a career-low 41.8% this past season, and Wong made noticeable gains in both his line-drive rate and especially his fly-ball rate as a member of the Brewers. As one would expect, the increased number of balls in the air also increased Wong’s power output. His .177 ISO (slugging percentage minus batting average) in two years with the Brewers was substantially higher than the .123 mark he carried in parts of eight seasons with the Cardinals.

On the defensive side of the game, however, the 2022 season was a bizarre and borderline nightmarish one for Wong. Typically one of the game’s best defenders at his position, Wong made a stunning 17 errors — more than he’d totaled in the three prior seasons combined. When his option was picked up, Wong told the Milwaukee Journal-Sentinel’s Todd Rosiak that his legs weren’t fully healthy in 2022, which he felt contributed to his surprising defensive shortcomings (Twitter links). Wong missed time in June with a calf strain that sent him to the injured list, and it’s certainly plausible that his legs cost him some of  his typical defensive excellence.

It was a similar tale for Winker in 2022, as injuries weighed down his production in what will now be his lone season as a Mariner. Acquired alongside Eugenio Suarez in a trade that sent pitching prospect Brandon Williamson, outfielder Jake Fraley and righty Justin Dunn to Cincinnati, Winker (perhaps literally) limped through the weakest offensive season of his career before undergoing left knee surgery and a second procedure to address a bulging disc in his neck back in October. 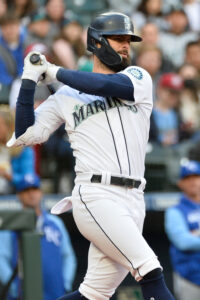 The extent to which those injuries dogged Winker can’t be known for certain, but the former Reds slugger went from one of the game’s best hitters against right-handed pitching to a lackluster .219/.344/.344 batting line with the Mariners in 2022.

Winker’s defense was also impacted; he’s never been considered a plus defender in the outfield corners, but he logged career-worst marks in Defensive Runs Saved (-16), Ultimate Zone Rating (-7.2) and Outs Above Average (-10) in the Emerald City. Beyond Winker’s deteriorating performance on the field, Ryan Divish of the Seattle Times reported in October the manner in which Winker had fallen out of favor in the Seattle clubhouse.

The decline was swift and fairly stunning. In the two seasons prior to being acquired by the Mariners, Winker was one of the game’s three best hitters against right-handed pitching, trailing only Juan Soto and Bryce Harper in terms of wRC+. He posted a video game-esque .321/.417/.619 batting line in 509 plate appearances against righties in that span, and while his production against fellow lefties was nowhere near that level, he still walked at a 12% clip against them, resulting in a .314 OBP. His .199 average and .338 slugging against lefties were dismal, but at the very least, Winker could get on base at a near-average clip even in disadvantageous platoon matchups.

The Brewers’ hope will be that the pair of surgeries and an offseason of rest and rehab will get Winker back to the form he showed when he was a thorn in their side as a member of the division-rival Reds. Only time will tell, however, whether Winker is indeed able to rebound.

If Winker is unable to return to form, the Brewers can still pin some hopes on Toro — another rebound candidate looking to benefit from a change of scenery. The switch-hitting 25-year-old (26 later this month) was one of the top prospects in the Astros’ system for several years but never got the opportunity to establish himself for a Houston club that had Alex Bregman at third base and Jose Altuve at second base — Toro’s primary positions. The Astros traded Toro and veteran reliever Joe Smith to the Mariners in a controversial deadline swap that saw Seattle send then-closer Kendall Graveman and righty Rafael Montero to Houston in return. 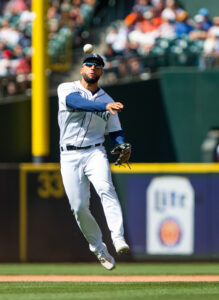 There were plenty of parallels between that Toro trade and the 2022 trade that saw the Brewers send Josh Hader to San Diego. As was the case with Brewers fans this year, Mariners fans — and the clubhouse — were angered to see the closer of a contending club traded to another postseason contender, even though both the Mariners (Smith, Toro) and Brewers (Taylor Rogers, Esteury Ruiz, Robert Gasser) received some immediate MLB help and long-term prospect value in the return.

Unfortunately for the Mariners, Toro wasn’t ever able to fully cement himself as a regular fixture in the lineup. He caught fire with the Mariners immediately following the trade, even connecting on a memorable go-ahead grand slam against Graveman himself just one month after the trade. The 2022 season, however, saw Toro receive infrequent playing time and struggle to a .185/.239/.324 slash in 352 plate appearances. That said, he’s not far removed from being a well-regarded prospect, is still in his mid-20s, and carries a career .343/.451/.545 batting line in Triple-A, so there’s reason to hope he could yet break through.

Toro does have a minor league option remaining, so it’s not a lock that he’ll open the ’23 season on the Brewers’ roster, but he’ll head to Spring Training competing for time at either second base or third base. Both he and Luis Urias have ample experience at both positions, but the ideal defensive alignment would be Toro at third base and Urias at second base. Of course, it’s possible that the Brewers will deepen their infield mix with further moves this offseason, and top infield prospect Brice Turang could factor into the mix at second base early in the season, too, after hitting .286/.360/.412 in Triple-A last season.

In all likelihood, the trade is just one amid a series of moves for both clubs involved. The Mariners were open to adding another outfield bat even before trading Winker, and they could now even more clearly accommodate a notable bat in left field or at designated hitter. The Brewers, meanwhile, have focused thus far on trimming the margins of the payroll and extracting some modest value for players whom they feel they’re able to replace in-house (e.g. Wong, Hunter Renfroe).

It’s no doubt been a frustrating start to the winter for many Milwaukee fans, but the Brewers have thus far moved on from players who were controllable through 2023 only. They’ve scaled back payroll to an extent in doing so, and the question will now be one of how — or if — they reallocate those dollars. It’s possible they’ll even turn and flip Winker to another club, but they’ve not yet shown any indication of a full-on rebuild, so at some point it seems likely the Brewers will make some at-least modest upgrades to the roster.