1:05pm: The Giants announced the signing.

11:58am: The Giants have agreed to a two-year, $25MM contract with free-agent righty Ross Stripling, reports ESPN’s Jeff Passan (Twitter link). Stripling, a client of Excel Sports Management, will be able to opt out of the contract after the 2023 season. It’s the exact same set of terms the Giants used to reel in lefty Sean Manaea earlier this week. 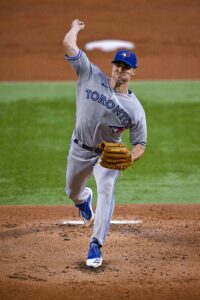 The contract contains a $5MM signing bonus that’ll be paid out in equal $2.5MM installments — one in 2023 and one in 2024, per Joel Sherman of the New York Post (Twitter link). Stripling will also earn a $7.5MM salary this coming season before deciding whether to opt out of a $12.5MM salary for the 2024 campaign.

Stripling, 33, is surely a familiar face for Giants president of baseball operations Farhan Zaidi, whose time as Dodgers general manager overlapped with Stripling’s time in Los Angeles. The veteran righty has served as a swingman for much of his time in the Majors, often functioning as a sixth starter with the Dodgers or with the Blue Jays, who acquired him at the 2020 trade deadline.

The 2022 season, however, saw Stripling step into a full-time rotation role when the Jays lost lefty Hyun Jin Ryu to Tommy John surgery. Stripling proved to be a godsend, making 24 starts and pitching to a 2.92 ERA in 123 1/3 innings out of the rotation. That’s an average of just over five frames per start, but Stripling’s results were nothing short of excellent.

In Stripling, the Giants will add a versatile arm who’s had success in multiple roles. He won’t overpower many hitters with a fastball that averaged just 91.9 mph, but Stripling offsets a below-average 20.7% strikeout rate with a solid 43.8% grounder rate and some of the best command in the Majors. This past season’s 3.7% walk rate was the third-lowest mark of any pitcher to throw at least 100 innings in 2022, and his 11% swinging-strike rate and 37.9% opponents’ chase rate at least suggest that there’s some strikeout upside even with the pedestrian velocity.

It bears mentioning that from 2020-21, Stripling logged an unsightly 5.14 ERA and 5.52 FIP in 150 2/3 innings between the Dodgers and Jays, due in no small part to a mammoth average of 2.2 homers per nine innings pitched. However, the long ball hasn’t been a prominent source of trouble for him outside those two seasons, and he registered a career-best 0.8 homer per nine frames this past season. Aside from that two-year rough patch, Stripling carries a sub-4.00 ERA in his other five MLB campaigns.

For the Giants, Stripling adds even more depth to an already strong group of potential starters. He joins the aforementioned Manaea as a complement to ace Logan Webb, lefty Alex Wood and righties Alex Cobb and Anthony DeSclafani. The Giants also enjoyed a nice rebound from swingman Jakob Junis in 2022, giving them at least seven rotation options on the big league roster.

It’s fair to wonder whether the addition of Stripling more formally removes the Giants from the bidding on free-agent ace Carlos Rodon, who opted out of the second year of his contract in San Francisco and has reportedly been seeking a deal of at least six to seven years in length this winter. Susan Slusser of the San Francisco Chronicle reported yesterday that the Giants remained in pursuit of Rodon even after agreeing to terms with Manaea, but Stripling further crowds the pitching staff.

Regardless of whether Rodon remains in the cards, the forthcoming additions of Manaea and Stripling position the Giants well in the event of injuries arising elsewhere on the starting staff. That’s critical for the Giants, given the health track records of several of their in-house options. DeSclafani tossed only 19 innings in 2022 due to a tendon injury in his ankle that ultimately required surgery. Wood and Cobb worked a mostly full slate of starts last year, but Cobb pitched just 158 innings from 2019-21 and Wood logged only 48 1/3 innings from 2019-20 due to shoulder and neck woes. Even Webb, who worked a team-high 192 1/3 innings in 2022, missed a few weeks in 2021 due to a shoulder strain.

After bringing Stripling into the fold, the Giants are up to a projected $157.6MM payroll for the upcoming season and a luxury-tax ledger just north of $180MM, per Roster Resource. They’re still more than $40MM south of their franchise-record $200.5MM Opening Day payroll and more than $50MM shy of the $233MM luxury-tax barrier. That type of payroll space sets the stage for another marquee addition, should the Giants find a deal to their liking. They’ve already added Manaea, Stripling and Mitch Haniger, in addition to retaining Joc Pederson on a qualifying offer, but the Giants have been linked to Rodon and are one of the primary suitors for free-agent shortstop Carlos Correa, so the Stripling pact surely isn’t their final move of the offseason.