December 9: The Mets have officially announced the signing.

December 7: The Mets and left-hander José Quintana are in agreement on a two-year, $26MM contract, pending a physical. He will make even salaries of $13MM in each season.

Quintana, 34 in January, was a remarkably steady and consistent member of the White Sox rotation in his first five seasons. He debuted in 2012 with 22 starts, three relief appearances and a 3.76 ERA. For the next four seasons, he made at least 32 starts in each campaign while keeping his ERA between 3.51 and 3.20.

Unfortunately, he hit a few rough patches after that, as his ERA ticked up over 4.00 for three straight campaigns from 2017 to 2019, with Quintana getting traded across town to the Cubs in that time. A thumb injury in 2020 limited him to just 10 innings pitched in the shortened campaign. He signed with the Angels for 2021 but was shelled in nine starts to begin the year and got moved to the bullpen. 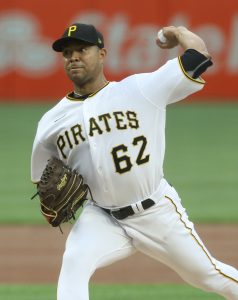 For 2022, the rebuilding Pirates took a flier on Quintana with a one-year, $2MM deal. The hope was that he would return to form, provide some veteran stability for their young rotation and perhaps turn himself into a trade chip by the deadline. That plan could hardly have gone much better, as the southpaw made 20 starts for the Bucs, posting a 3.50 ERA. His 20.6% strikeout rate was a bit below average, but he paired that with strong walk and ground ball rates of 7.2% and 45%, respectively. He and Chris Stratton were dealt to the Cardinals at the deadline and Quintana continued his strong campaign in St. Louis. He made another 12 starts with a 2.01 ERA, finishing the year with a 2.93 mark across 32 starts and 165 2/3 innings.

Quintana was then able to return to free agency in a much stronger position than his previous trips. In addition to his strong platform season, his midseason trade made him ineligible for a qualifying offer and his age made it unlikely that he would be able to pursue a lengthy contract. MLBTR predicted a two-year, $24MM deal, with Quintana eventually nudging just barely beyond that.

For the Mets, they were facing a great deal of turnover on their pitching staff, with Jacob deGrom, Chris Bassitt and Taijuan Walker reaching free agency, along with several relievers. deGrom has since joined the Rangers and Walker the Phillies. The Mets effectively replaced deGrom by signing Verlander and have now added Quintana to take a role in the middle or back of the rotation. That gives the Mets a front four of Verlander, Max Scherzer, Carlos Carrasco and Quintana. They have some internal options to take the fifth spot, such as David Peterson and Tylor Megill, but it’s also possible that they continue to pursue external additions.

This signing brings the club’s payroll to $290MM for next year, according to Roster Resource, with a competitive balance tax figure of $301MM. It’s unclear exactly how much they plan on spending by the time the dust has settled, but owner Steve Cohen has previously floated $300MM as a ballpark figure, per Jon Heyman of The New York Post. In terms of the luxury tax, they are already beyond the fourth and highest tier of penalization, which will be $293MM next year. As a second-time payor, they are subject to escalating penalties, meaning they will pay a 30% tax on the spending between $233-253MM, 42% between $253-273MM, 75% between $273-293MM and 90% above the top tier.

Ken Rosenthal and Will Sammon of The Athletic first reported that Quintana would join the Mets at $26MM over two years. Joel Sherman of The New York Post first added that it would break down into even salaries of $13MM in each year.