December 16: The Twins are reportedly in agreement with outfielder Joey Gallo on a one-year deal that will pay him $11MM. The two-time All-Star is represented by the Boras Corporation.

Gallo, 29, has occasionally been one of the most fearsome sluggers in the league but is coming off a rough stretch. With the Rangers from 2017 to 2019, he was the poster boy for the three true outcomes: home run, strikeout and walk. In that three-year stretch, he struck out in 36.8% of his plate appearances while the league averages in that time hovered around 22%. His 14.3% walk rate was well beyond the 8.5% league average in that time. He also launched 103 home runs over that stretch, leading to a batting line of .217/.336/.533. Despite the huge punch-out totals, that production was 20% above league average, as evidenced by his 120 wRC+. 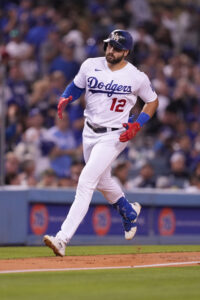 Though those sub-Mendoza batting averages are certainly unpleasant to the eye, there’s plenty of reason to think he could get the train back on the tracks. For one thing, he’s still young, having just turned 29 last month. He also still knocks the snot out of the ball, as his hard hit percentage was in the 94th percentile in 2022, his barrel rate in the 98th and his max exit velocity 89th. The upcoming rules banning defensive shifts are likely to help him out as well, since he bats from the left side. According to Statcast, Gallo is shifted in 90% of his plate appearances, one of the 20 highest such rates in the league.

Even if he can’t bounce back at the plate, he can still be a valuable player due to his strong defense. He’s been given a positive grade in the outfield by Defensive Runs Saved in each season of his career, while Ultimate Zone Rating and Outs Above Average only gave him a negative number in 2022. For his outfield work as a whole, he has 43 DRS, 19 UZR and 7 OAA. Even though his bat was subpar all year in 2022, he was still worth 0.6 wins above replacement, in the eyes of FanGraphs. In 2021, when he was good at the plate with Texas but bad with the Yanks, he was worth 4.2 fWAR.

For the Twins, Gallo should slot into one of the outfield corners, with Byron Buxton in center. This only adds to a cluttered outfield mix, as the club has many options on its roster. It was reported last week that the club is getting trade interest in Max Kepler, as they also have Trevor Larnach, Alex Kirilloff, Kyle Garlick, Gilberto Celestino, Royce Lewis, Nick Gordon, Matt Wallner and Mark Contreras in their outfield mix. Some of those players can also play the infield, but it’s quite the crowded dance floor. With Gallo now added into the mix, it would seem to make a trade of Kepler or someone else more likely.

The Twins should still have payroll space available, as most of their offseason has been geared around a pursuit of Carlos Correa. The club reportedly made him an offer of $285MM over 10 years, or $28.5MM per season, though he instead signed with the Giants for $350MM over 13 years. The Twins have now given $11MM to Gallo instead, taking a chance that he can rediscover some of his previous form in a new environment. This move brings the club’s payroll up to $118MM, per Roster Resource. The club’s franchise record for an Opening Day payroll was the $134MM figure they ran out in 2022, per Cot’s Baseball Contracts. Assuming they’re willing to spend at similar levels this year, they still have about $16MM to work with, though Kepler will have an $8.5MM salary in 2023 as well as a $1MM buyout on a $10MM club option. Moving him could create some extra payroll space unless they also take on some salary in the trade.

Despite unexpectedly landing a star like Correa for 2022, the Twins disappointed by finishing 78-84, 14 games back of the Guardians in the American League Central. They will now have to try to figure out how to be better without Correa in 2023. Better health would be one way, as they suffered an incredible number of injuries in 2022. Another path might be to reallocate his $35.1MM salary into multiple players and hope for surplus value, with Gallo now one of them.