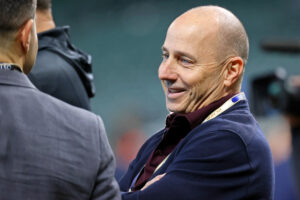 Now 55 years old, Cashman has been in place as the Yankees’ general manager since 1998. With Billy Beane’s recent transition to an advisory role with the A’s, Cashman became the longest-tenured baseball operations leader in Major League Baseball. The team has somewhat remarkably had a winning record in all 25 of Cashman’s seasons at the helm and made the playoffs in 21 of those 25 campaigns. However, it’s now been 13 seasons since they’ve reached the World Series, with their 2009 victory over the Phillies standing as the most recent time the Yankees advanced past the ALCS.

Cashman has become a lightning rod for criticism from Yankee fans as they continue to voice frustration over the team’s World Series “drought,” and that criticism will only grow louder if reigning AL MVP Aaron Judge departs in free agency, whether to sign with the Giants (his childhood team), the Dodgers or a “mystery team” whose presence in the Judge bidding is not yet known.

Yankees owner Hal Steinbrenner, however, has taken a different tack than that of his late, oft-impulsive father George, praising Cashman’s stability and the annually competitive rosters he’s put together. Granted, possessing one of the sport’s largest payrolls each year can help to paper over plenty of missteps, but we’ve seen plenty of deep-pocketed clubs with huge payrolls post sub-.500 records and miss the postseason over the years. Payroll notwithstanding, that level of consistency is indeed impressive, though the regularity with which the Yankees reach the playoff field has also inherently increased expectations; division titles and ALCS berths are  not considered sufficient by a substantial portion of the team’s fan base.

The challenges for Cashman that lay ahead begin but certainly don’t end with Judge. The 2022 American League MVP carried an otherwise lifeless Yankees offense through the second half of the season and captivated a national audience along the way, chasing down and narrowly surpassing Roger Maris’ longstanding American League home run record. Re-signing Judge would send the Yankees barreling into the second tier of luxury tax penalization at a time when there are other clear needs on the roster.

Even if Judge is retained, the Yankees will have a heavily right-handed lineup in need of some balance, to say nothing of multiple undesirable contracts (e.g. Josh Donaldson, Aaron Hicks) driving up the actual bottom-line payroll and the team’s luxury-tax number. There’s work to do in the bullpen, too, and the Yankees could see two starters reach free agency following the 2023 season in Luis Severino and Frankie Montas. Their potential exit surely plays a role in the team’s reported interest in Carlos Rodon, who’d likely become an even greater focus should Judge depart. At that point, Cashman and his staff would need to determine whether to pivot and dive back into a shortstop market they eschewed one offseason ago. That decision, in particular, will be placed under a microscope over the next couple years as prospects Anthony Volpe and Oswald Peraza take center stage in the Bronx.

As with any general manager or president of baseball operations, Cashman’s tenure is checkered with hugely successful transactions and regrettable deals. Last winter’s acquisition of Donaldson and Isiah Kiner-Falefa likely didn’t provide the value the team was hoping for (particularly since it cost them a solid campaign from Gio Urshela), and August’s Montas acquisition immediately harkened back to Sonny Gray’s disappointing tenure with the Yankees. Then again, recent trades for Jose Trevino, Clay Holmes and Anthony Rizzo have been excellent, and Harrison Bader shined with a brilliant postseason effort.

All any general manager or president of baseball ops can do is hope the successes outweigh the missteps and hope to be able to convince ownership they’re the proper person for the job. Yankee fans can have spirited debates about whether the first half of that sentence applies to Cashman, but it’s abundantly clear that Steinbrenner values the continuity, professionalism and persistent winning that Cashman has overseen in what’s now an incredible quarter century on the job.