December 23: The Phillies are adding an established closer. They’re reportedly in agreement with Craig Kimbrel on a one-year, $10MM pact. Kimbrel is a SportsMeter client.

Philadelphia will be the seventh MLB team for Kimbrel, who is headed into his 14th season. He returns to the NL East, where he was arguably the sport’s best closer from 2011-14 as a member of the Braves. Kimbrel remained excellent after being dealt to the Padres and subsequently to the Red Sox. Dave Dombrowski was running baseball operations in Boston while Kimbrel was there for three straight All-Star seasons between 2016-18. They’re now reunited with Dombrowski leading the charge in Philly.

Since leaving the Red Sox, Kimbrel has had his share of ups and downs. He lingered in free agency until June 2019 before securing a three-year commitment from the Cubs. That deal looked like a misfire after he posted an even 6.00 ERA in 41 appearances through the end of the 2020 campaign. However, he looked good as ever at the start of the third season. The right-hander posted a microscopic 0.57 ERA through 31 2/3 innings in the first half of 2021, securing his eighth All-Star selection in the process. The Cubs flipped him to the crosstown White Sox in a deadline deal that brought back Nick Madrigal.

Kimbrel didn’t finish the season all that well, posting a 5.09 ERA for the Sox. Chicago exercised a $16MM option on his services for the 2022 season but shopped him most of last winter. In the days leading up to Opening Day, they sent him to the Dodgers in a one-for-one swap for AJ Pollock. Kimbrel spent his age-34 campaign in Los Angeles, putting up solid numbers overall but showing some worrisome signs down the stretch.

While his first half ERA was a pedestrian 4.35, he struck out more than a third of opponents in that time. The Dodgers relied upon him as their primary closer early in the year, but he began to fall out of favor as the season pulled along. Kimbrel’s strikeout rate in the second half was a modest 20.7%. His ERA checked in at 3.10 thanks to a meager .227 batting average on balls in play against him. The Dodgers were clearly skeptical of Kimbrel’s ability to maintain that kind of batted ball fortune. They removed him from the ninth inning in September and scratched him from the roster entirely come playoff time. 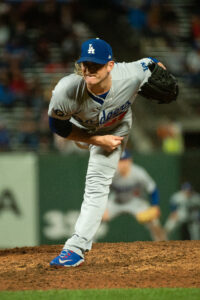 It’s surely not the way either Kimbrel or the team envisioned the season ending, but his 2022 campaign was hardly a disaster. He posted a 3.75 ERA across 60 innings overall. His 27.7% strikeout rate and 12.1% swinging strike percentage were each a bit better than par, and he averaged a quality 95.8 MPH on his fastball. He walked batters at a elevated 10.8% clip and gave up a fair bit of hard contact, but he still showed quality bat-missing stuff. While it wasn’t vintage Kimbrel or even at the level of his 2021 production, he showed enough to believe he’s still capable of solid play.

Kimbrel went 22 of 27 on save attempts this year. He’s now up to 394 saves for his career, most of any active player. Kimbrel should soon become the seventh pitcher in MLB history to reach the 400-save mark, and he’ll have a path back to ninth-inning work in Philadelphia. Players like José Alvarado and Seranthony Domínguez previously stood as the in-house favorites for closing work, though they’re each capable of taking on higher-leverage responsibilities in the seventh or eight inning.

It’s a relatively low-cost gamble for the Phils, matching the $10MM flier they took on Corey Knebel last offseason. They’ll have to tack on a few million extra in taxes, as they’re likely to exceed the luxury tax threshold for a second straight season. Philadelphia’s luxury tax commitments are up to approximately $251MM, as calculated by Roster Resource. They’re subject to a 30% tax on every dollar spent between $233MM and $253MM, so the Kimbrel signing comes with an extra $3MM in fees. It also brings them within a couple million dollars of the second CBT threshold at $253MM. That would come with a 42% tax on overages, with higher penalties in the event they top $273MM.

Precisely where owner John Middleton wants to draw the line isn’t clear, though the Phils have little reason to spare much expense on the heels of a pennant win. Philadelphia has already brought in Trea Turner and Taijuan Walker this winter, and Kimbrel joins Matt Strahm as relief additions. The Phils are set for another battle with the Mets and Braves in a top-heavy NL East, and they’ll hope Kimbrel has plenty of opportunities to lock down wins at the back end of the bullpen.

Ken Rosenthal of the Athletic first reported Kimbrel and the Phillies had agreed to a contract. Jeff Passan of ESPN was first to report the one-year, $10MM guarantee.