Jan. 11: The Red Sox have formally announced the contract as a 10-year extension with Devers, spanning the 2024-33 seasons. As reported last night, that keeps his 2023 luxury tax hit at $17.5MM (the sum of the one-year deal he agreed to in order to avoid arbitration), while the $31.35MM luxury hit on his extension will go into effect in 2024.

Jan. 4: The Red Sox and third baseman Rafael Devers are in agreement on an extension that will keep him in Boston through the 2033 season. Though many outlets reported this as an 11-year extension worth $331MM, Devers and the Sox had already agreed to a $17.5MM salary for 2023. In terms of new money, then, hes’s agreed to a ten-year, $313.5MM extension. There are no opt-outs in the deal and he won’t have a no-trade clause. The deal is pending a physical and is not yet official. Devers is represented by Rep 1 Baseball. 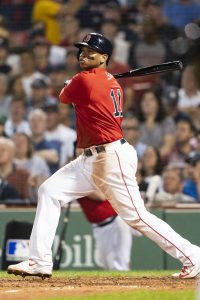 Devers, 26, was set to enter his final year of club control. He was slated to reach free agency after the upcoming campaign but will now stay in Boston for an extra decade, with this agreement set to take him through the 2033 campaign and his age-36 season. It’s easily the largest deal in franchise history, which was previously held by the $217MM deal for David Price. It will also be the 10th-largest guarantee in MLB history, while the $31.35MM average annual value will get him into the top 20 all-time.

Devers will now stick with the only organization he’s ever known and could well spend his entire career in Boston. The Sox signed him out of the Dominican Republic as a 16-year-old in August of 2013, giving him a $1.5MM bonus. He worked his way through the minors and was seen by many as one of the top prospects in the sport. Baseball America ranked him in the top 20 on their top 100 list in both 2016 and 2017. In that latter season, Devers cracked the majors and debuted while just 20 years old. Despite that young age, he hit 10 home runs in just 58 games and produced a batting line of .284/.338/.482. That led to a wRC+ of 110, indicating he was 10% better than the league average hitter.

Devers endured a bit of a sophomore slump in 2018 but has put that behind him in a big way. Over the last four years, he’s hit 108 home runs and produced an overall batting line of .292/.352/.532. That production has been 32% better than league average by measure of wRC+, placing him among the top 25 hitters in the league for that time period.

For the Red Sox, it’s been a bit of a rollercoaster time for the franchise over the past few years. They hoisted the World Series trophy in 2018 but then saw star right fielder Mookie Betts traded to the Dodgers alongside Price. Though the Sox got some interesting players in return, it was widely-viewed as a financially-motivated decision, a bitter pill for fans to swallow after a strong run of success that saw them win four titles from 2004 to 2018. The club slid to last place in the American League East in the shortened 2020 campaign.

Though 2021 saw the club surprise many onlookers by returning to the postseason, they had another disappointing campaign in 2022, finishing last in the division for the second time in three years. This offseason, another star player departed when shortstop Xander Bogaerts opted out of his contract. Though the Sox maintained that retaining Bogaerts was a top priority, he instead signed with the Padres for $280MM over 11 years while Boston came up well short, reportedly in the $160MM range.

With Betts and Bogaerts both leaving for California, the focus turned to Devers. With just one year until free agency, many wondered if the Fenway Faithful would have to endure a third superstar departure in a four-year span, or perhaps a three-year span if the club considered a trade. The reporting on the matter seemed dire as recently as a couple of months ago, indicating that the sides were not close in their extension talks with Boston offering something in the vicinity of $212MM. Instead, they have stepped up in a big way to ensure that Devers is the face of the franchise for years to come. In the long run, it’s possible that Devers may have to move from third base to first base, since his defense isn’t as highly regarded as his bat. But those will be conversations for later days, with another 11 years for the club to figure out how to set the lineup.

In the short term, this won’t change the makeup of the Red Sox on the field, since Devers was already going to be a part of the 2023 club. But it could have an impact on the financial ledger. Devers was previously set to have a $17.5MM count towards Boston’s luxury tax but that number will now jump to $30.09MM. The specific breakdown of the Devers deal isn’t known, but the competitive balance tax is calculated based on the average annual value of the deal, so the breakdown won’t change the CBT calculations. With that new figure in place, the club’s total CBT tally is now $224MM, according to the calculations at Roster Resource. That puts them within striking distance of the lowest luxury tax threshold, which will be $233MM this year. Any further additions, whether this offseason or as the season itself progresses, could potentially push them over the line. Since they paid the tax in 2022, they would be considered a second-time payor in 2023.

Former player Carlos Baerga first reported that the sides were in agreement on Instagram, but had the terms as 11 years and $332MM. Ken Rosenthal of The Athletic first reported the $331MM figure and added the $20MM signing bonus. Jeff Passan of ESPN clarified that the deal included 2023 and would only add ten years beyond that. Jon Heyman of The New York Post first added the absence of a no-trade clause and Alex Speier of the Boston Globe first had the lack of opt-outs.